Rattlesnake meat is a delicacy, if you’re hungry enough. 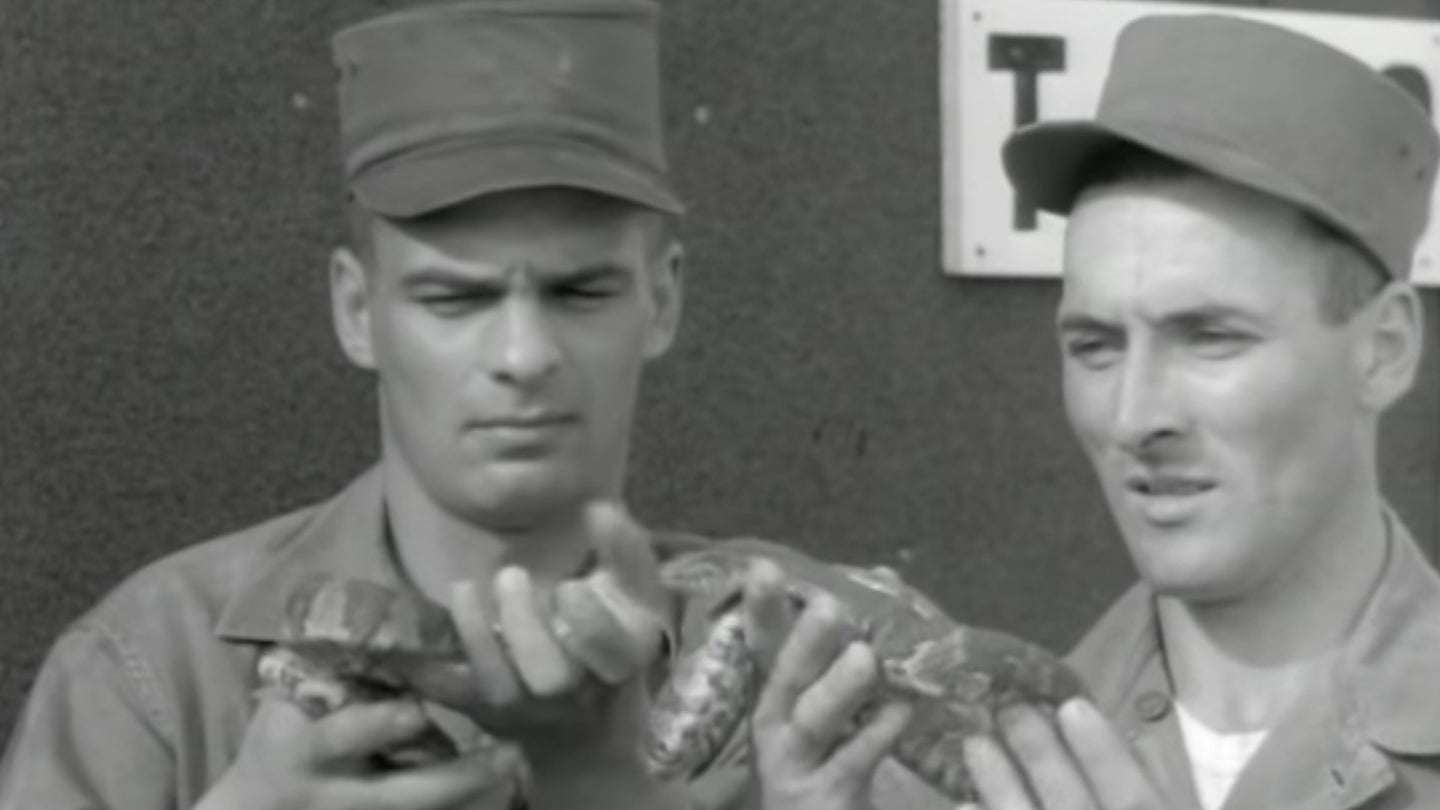 It’s 1953. Dwight Eisenhower is president. Burt Lancaster and Frank Sinatra are the stars of From Here to Eternity at the movies, but if you’re looking for a late-night meal near Fort Benning, Georgia, Waffle House won’t come into existence for another two years. You’re a young noncommissioned officer, about to spend the next seven weeks in the mountains of northern Georgia and the swamps of the Florida panhandle going through the “most rugged training in the Army today.”

This is Ranger School for the atomic age.

A lot has changed in the intervening 70 years since this informational movie, brought to you by the Army Signal Corps’ documentary program “The Big Picture,” was produced. Modern Ranger units were still in their relative infancy, having only been organized a decade earlier. The school itself was established just a few years prior in 1950 and was much smaller — this was before every newly minted infantry officer was expected to attend.

But there’s also plenty of footage that will look familiar to any Ranger School graduate. Even in 1953, there was the log walk, dropping 30 feet into a freezing pond screaming “Ranger!”, and plenty of patrolling through swamps.

The film starts at Fort Benning, with a newly arrived class ready to begin training. They run through the woods, push through the bayonet assault course, and learn the timeless art of blowing up trees with high explosives.

There are also combatives. As our trusty narrator says, “proficiency in the precise art of hand-to-hand combat is a must!”

Soon enough, the Rangers are headed to Eglin Air Force Base in Florida for some swamp training. “As far as we’re concerned, an infantryman is limited by only one thing,” says the major running the training, “What he’s got in his gut, and what he’s got in his head.”

The Ranger recruits attend a survival class, where they learn that palmetto leaves can be a nourishing, if not flavorful, source of nourishment. They also get an introduction to the local fauna. As these men learn, “rattlesnake meat is a gourmet’s delight.”

There are some crocodiles too. Don’t worry, though, “no Ranger students have been lost down alligator gullets…yet!”

The men go through the water confidence course. They climb 30 feet in the air and walk along wooden beams over the swamp water. They also go on patrol, under the observation of a Ranger instructor.

Then it’s time for some mountain training at the Ranger camp in the mountains outside of Dahlonega, Georgia. “Here, man’s best friend is the rope,” we hear, “and Ranger students learn to make good use of it.”

The Rangers build and cross a rope bridge. They ride a zipline over a ravine. They repel over a cliff. They ride what “is casually called the death slide,” riding a rope from 100 feet in the sky into a lake.

Just as in Ranger School today, the students rotate through different positions while on patrol. The final mission is an assault on a dam, which the students prepare for along with their very good boy and mascot, Goober.

The patrol crosses mountains and streams on the way to the attack. In a bit of staged dialogue, one Ranger tells his comrade “Man, I’m so bushed if I had a porcupine I’d use it for a pillow and go right to sleep.”

“If I had a porcupine, I’d eat it,” replies the other Ranger (It’d still probably be better than a vegetable omelet MRE).

The Ranger students successfully assault the objective and notionally blow up the dam. Then it’s time for an assessment with the instructors. Goober the dog is, of course, along all the way.

Back at Fort Benning, there is graduation – Goober, presumably also a Ranger, is also present – for those who have made it through two months of the toughest training the Army can offer, circa 1953.

“His knowledge will spread to those around him until the entire unit will be a better fighting team,” says our narrator.

When this video was filmed, the Army was in flux. The introduction of atomic weapons left the Army, and the Marine Corps as well, wondering what role it would play in a future war. Within a few years, the Army would reorganize itself to fight on an atomic battlefield and test out weapons like a nuclear recoilless rifle.

Ranger training, as the video thoroughly illustrates, is timeless. It may be a bit more organized now, but whether it is 1953 or the present day, it’s going to suck, you’re going to spend plenty of time neck-deep in a Florida swamp, and you’re going to be happy when you graduate. Maybe bring back the dog mascots, though.