The story of Kilroy, and why he was there

The iconic phrase, “Kilroy was here”, usually accompanied by a cartoon drawing of a bald man with fingers peeking over the horizon, has become forever associated with American GIs. 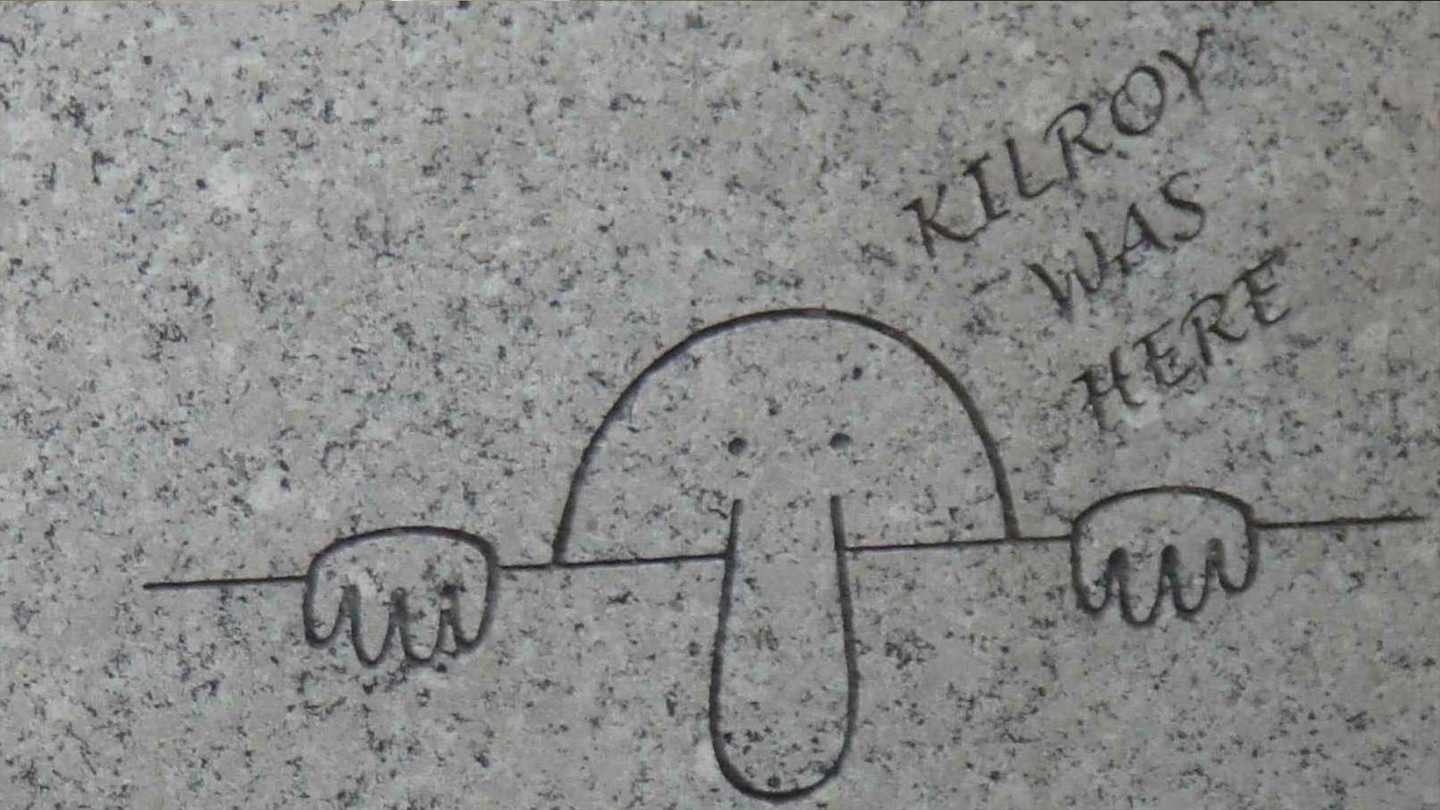 The iconic phrase, “Kilroy was here”, usually accompanied by a cartoon drawing of a bald man with fingers peeking over the horizon, has become forever associated with American GIs in World War Two. The phrase and drawing were found on everything from captured equipment to latrine walls, and everywhere in between. The harder a place was to get to, the more likely a ‘Kilroy’ would pop up.

So how did the world’s first international meme come to be?

In World War One “Foo was here” was scrawled across camps occupied by the Australian Expeditionary Force. Generally assumed to have come from the acronym for Forward Observation Officer, veterans of that war may have brought the tradition with them into the next global conflict over two decades later.

While dozens of candidates have stepped forward to claim credit for the phrase, the most likely origin comes from James J. Kilroy, a shipyard inspector in Quincy, Massachusetts. During WW2 the yard was churning out ships by the hundreds, and Kilroy’s job was to inspect riveter’s work at the end of their shifts. When the riveters had finished for the day the inspectors would use chalk to mark where they had finished, allowing their bosses to pay them accordingly. Since they were paid by the rivet, unscrupulous workers would often erase the chalk marks and move them further back to take credit for other’s labor, so Kilroy would use a harder to erase crayon and write “Kilroy was here.”

Since most of his inspection marks were put in places no GI could have accessed to scribble graffiti, discovery of the phrase in hidden bulkheads and compartments where no one had seemingly gone before gave the words an almost mythical quality. No one knows exactly how many ships Kilroy inspected in this manner, but even a few dozen meant that his marks could have been seen by thousands of deploying personnel who carried the story into the warzone.

Another claim in a daily newspaper at the time alleged that a Sgt. Francis Kilroy wrote “Killroy will be here next week” on a board at his airbase in Florida, and while hospitalized his squadmates took up the phrase, shortening it to “Kilroy was here” and leaving them on announcement and chalk boards all around the base. For all we know both stories are true.

Regardless of the origins, by war’s end the phrase had been written and discovered in thousands of locations and scrawled on friendly and captured equipment across the world, always associated with allied soldiers.

The balding cartoon commonly seen above or below the phrase has murkier origins. In the late 1930’s sarcastic phrase, “ Wot, no ____”, became incredibly popular, with the final element being whatever household staple happened to be running short (sugar, eggs, milk, etc). British and Commonwealth soldiers during the war would write the phrase in barracks and storehouses to complain and joke. A glider was found after Operation Market Garden with “Wot, no engines?” written on it. Most researchers seem to agree that the balding cartoon now most associated with Kilroy began to be seen along with the American phrase by mid-1944. The character, commonly known as ‘Chad’ or ‘Doomie’ may have been originally created by Royal Air Force electricians using the Greek symbol for Omega and an RLC circuit sketch, which closely resembled the image known today.

One popular story claimed that RAF airmen had written “Wot, no leave?” under the image when their instructor had left the classroom.

However the image found its way into the embrace of American GI’s, ‘Kilroy was here’ took on a talismanic aura, with its mysterious origins only adding to its popularity. While the phrase and its associated meaning have faded as the world has moved on, the iconic words are still used in period films, stories, and documentaries, keeping the legend alive for the next generation.

If this wasn’t enough motivational history for you, join Fox Nation now to watch more historical content and profiles of American heroes, on series like What Made America Great. Active military and veterans can get a one year subscription absolutely free and enjoy all of their amazing programming. For instructions and programming details check them out here. You’ll be glad you did.