George Washington was a lot of things: An amazing portrait-poser, father of numerous national legends and myths, boon to the... 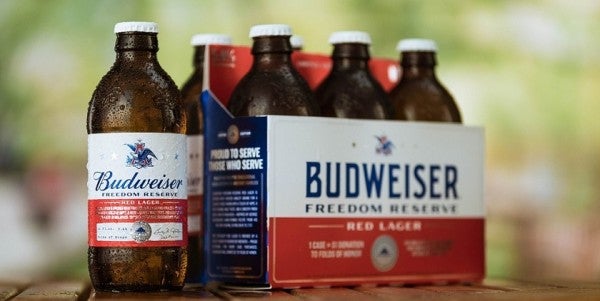 George Washington was a lot of things: An amazing portrait-poser, father of numerous national legends and myths, boon to the world of memes, career soldier, consummate badass, and yeah, our first president.

But the man was also an accomplished drinker, distiller, and brewer — a trait that Budweiser is leveraging with a new beer modeled after one of Washington’s personal beer recipes, according to Esquire.

Budweiser’s Freedom Reserve Red Lager is based on Washington’s original “small beer” recipe. It’s brewed by military veterans, with some of the proceeds going toward educational scholarships for military families through Folds of Honor, and is available now through September.

If you’re surprised that Washington was involved in the beer-brewing business, you shouldn’t be; he’s not the only founding father to try his hand at hops. In addition to brewing beer, Washington also ran one of the largest whiskey distilleries in the country at the time.

Washington's original recipe was for a “small beer” which is pretty much a Revolutionary War-style O'Doul's, but “the recipe’s inclusion in Washington’s diaries during wartime suggests that it was consumed as a regular beverage — and even perhaps an occasional substitute for water — among troops,” notes the Mount Vernon library.

In other words, Washington was like every other modern day general: He let his troops drink non-alcoholic beer while at war, because that’s fun.

Fortunately for us, Budweiser’s 5.4% ABV version of the founding father’s classic isn’t a light beer —at least, it’s not as light. So if you want to get sloshed like a true patriot, this might be a good choice.