Editor's note: In the fleeting final months of peace before the attack on Pearl Harbor, a group of pilots from... 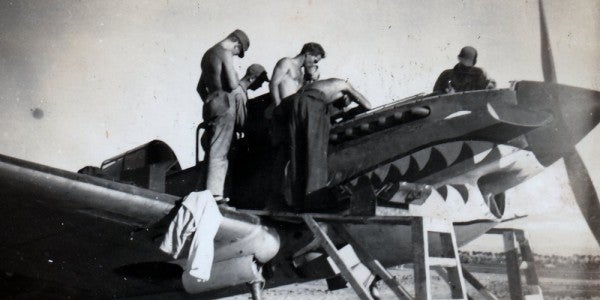 Editor's note: In the fleeting final months of peace before the attack on Pearl Harbor, a group of pilots from across the U.S. armed forces comprising the First American Volunteer Group (AVG), led by legendary Army pilot Claire Lee Chennault, secretly traveled across the Pacific Ocean under false identities to secretly help the Chinese military ward off invading Japanese forces. InThe Flying Tigers: The Untold Story Of The American Pilots Who Waged A Secret War Against Japan, Sam Kleiner details the secret history of a covert operation “whose very existence would have scandalized the isolationist” United States — and the heroic men and women whose valiant efforts before and after Pearl harbor helped cement an alliance that would change the course of World War II.

As Christmas morning dawned, Bill Reed took up his position in the alert tent near the airfield, awaiting reports from the warning net of the expected attack. As the hours passed it began to seem as if the threat of a Christmas-day raid was a bluff, but at 11:00 a.m. a call came from the warning net that Japanese planes had been spotted and the pilots should scramble. Reed hurried to his P-40 and started the engine but was abruptly told to shut it down, as the signal had apparently been just another false alarm. As soon as he dismounted from the cockpit and returned to the alert tent, the scramble was back on. “In a matter of a minute or two we were in the air and climbing as rapidly as a P-40 will climb,” he wrote in his diary.

The battle plan was issued over the radio: “Orbit Hometown Angels 15,” which meant that his patrol of four P-40s should fly above Rangoon at fifteen thousand feet. They circled for thirty minutes without tracking anything. “I began to think people were just nervous,” Bill wrote, “and we had another patrol for nothing.” Then the plane ahead suddenly began rocking its wings. He anxiously scanned the sky. Some five thousand feet overhead a formation of about a few dozen Japanese bombers droned into view. Trailing them was a group of Japanese fighter planes “glinting wickedly in the sunlight.”

[Claire Lee] Chennault had taught the AVG pilots to strike from above, but the squadron had no choice now but to climb to meet the enemy. Reed quickly gained altitude, aiming for the bombers, but found himself head-to-head with a Japanese fighter. He squeezed the trigger and “raked him with a long burst, and saw tracers rake him through the length of the fuselage.”

With that plane all but certainly dispatched, he engaged in an inconclusive exchange of fire with two more Japanese fighters, and then climbed in a steep ascent up to twenty thousand feet, hoping to catch the bombers. He “attacked head-on, all guns blazing” and then flew past them. He hadn’t succeeded in hitting any of his targets, but as he prepared to turn back for another pass, he caught sight of an American plane in a dogfight with Japanese fighters a mile ahead. He rushed into the fight, but “we went round and round, with no one getting in any very good bursts.” He realized that he had flown far out over the Gulf of Martaban in the course of the battle, and headed for home.

Members of the First American Volunteer Group (AVG) post for a photo with their Chinese alliesCourtesy of the Family of J.J. Harrington

After linking up with the lone P-40 in sight, the pair flew over the open water and soon encountered three Japanese fighters heading to their base in Thailand. Despite the risk of running out of fuel in another dogfight, the two American planes pounced, dropping down on the fighters’ tails. Reed opened fire, and one Japanese fighter “exploded right in my face.” While he pulled up to avoid hitting the crippled craft, his squadronmate clipped the wing of another enemy plane, which “spun into the Gulf.” Reed dove away from the remaining Japanese fighter. His gas meter was “damn low” and he was still out in the Gulf. He saw another group of Japanese fighters in the distance but had to ignore them. As he sped toward land, it felt as if “the coast would never show up.” He made it to the base with a nearly empty tank. When he landed, he saw that he had taken his share of hits, but observed, “These P-40s absorb lead like a sponge does water.”

By the end of the afternoon, two pilots had not returned: Ed Over- end from California and George McMillan from Florida. The other airmen “had given them up for dead,” perhaps owing to the fact that much of the fighting had taken place far over the water. They sent back a message to Chennault in Kunming: “Two planes and pilots missing.”

The men gathered together that night, and as armorer Chuck Baisden recalled: “If you’ve ever drank Australian ale on a hot day, it does leave an effect on you. But that was my Christmas dinner. We never even thought about Christmas really, Christmas just wasn’t there, there was no feeling, my feeling was there was no Christmas at all.”

At 9:00 p.m., a car drove up to the airfield and, to the group’s astonishment, George McMillan stepped out. Not only was he alive, but he was carrying a Japanese saber. McMillan enjoyed the surprise as much as any of them, writing to his parents: “You should have seen them when I walked in!”

The excitement only grew as he related his harrowing story of survival. His plane was barely staying in the air as he cleared the coastline. He knew he couldn’t make it to the base, and took it down in a rice paddy. As his plane skidded to a halt, McMillan opened the canopy and waited to assess his situation. After a half hour, a group of men appeared in the distance. He used his good arm to wave his handkerchief, a sign that he was a friend. The local Burmese approached, offered him water, and guided him on a four-mile walk to a town, where they bathed his wounds and fed him. They then put him on a horse, and a guide took him to another town, from which he was given a ride back to the base. Along the way, he stopped to inspect a downed Japanese bomber, from which he retrieved the saber.

McMillan not only had survived a crash but was credited with having destroyed three bombers, more than any other AVG pilot in the air that day. He wrote to his parents: “While you were all eating turkey and cranberry sauce I led six men in an attack against thirty bombers and ten pursuit escort, ha! … Naturally, we felt pretty good over Xmas’ days work.”

From The Flying Tigers by Sam Kleiner, published by Viking, an imprint of Penguin Publishing Group, a division of Penguin Random House, LLC. Copyright © 2018 by Samuel Kleiner.