Firsthand memories are fading fast. But even newcomers to the leafy shores of Badin Lake, about an hour northeast of... 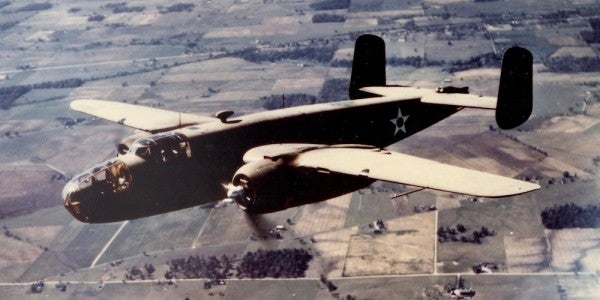 Firsthand memories are fading fast. But even newcomers to the leafy shores of Badin Lake, about an hour northeast of Charlotte, North Carolina, soon learn that a World War II bomber rests somewhere in its murky depths.

The plane that became known as the Badin Bomber crashed into the lake on June 8, 1944.

Observer reader Larry Drake, a Stanly County native who lives in Steele Creek, wanted to know more about the crash, so he posed a question to CuriousNC, a joint venture between The Charlotte Observer, The News & Observer and The Herald-Sun that invites readers to submit questions about North Carolina for our reporters to answer.

He wanted to know if the twin-engine plane had ever been found and about the crew who flew it.

They’re among the lingering questions about a wartime tragedy that struck far from enemy lines. A young pilot who wanted to signal to his bride instead died virtually before her eyes, near his home, taking his copilot with him.

Their remains, and the wreckage of the Navy’s version of a B-25 Mitchell bomber, are still entombed in the lake. Local people intend to keep it that way.

“It’s buried and nobody is supposed to mess with it anymore,” said David Summerlin, founder of the Badin Historic Museum on the lake’s southern tip.

Summerlin, 81, was a boy standing on his daddy’s porch when he heard the plane crash. Now the Badin museum displays the plane’s nose wheel and, outside, a four-foot granite monument to the crew that was dedicated in 2001.

Accounts of the crash itself, including what caused it, vary in detail. This one relies on an exhaustive report by underwater archaeologist Wendy Coble, who led an effort to find the sunken plane in 1999, that is posted by the Naval History and Heritage Command.

The pilot was Marine Corps 2nd Lt. Charles McDaniel, 21, whose family lived in Palmerville, a community near Badin Lake’s southern shore. His high school sweetheart and wife of seven months, Mary Elizabeth, was also living there with her family. McDaniel and his co-pilot, Navy Ensign John Withrow of Beaver Falls, Pa., were to ferry the new bomber from an Ohio factory to the Marine Corps base at Cherry Point near the North Carolina coast.

On the day of the crash, McDaniel took off from a stopover point, Charlotte’s Morris Field. As he flew east toward Cherry Point, he diverted his course by a few miles to circle the lake in a prearranged signal that he wouldn’t be back in Charlotte that night.

“The plane reportedly made the circle twice, with no apparent trouble, but on the third circuit, the family listened in horror as a sputtering sound was followed by a loud explosion,” Coble wrote. “They never saw the plane or its occupants again.”

Mary Elizabeth McDaniel looked at her brother in disbelief and, bursting into tears, fled into the house.

One witness, 90-year-old Wade Adkins, told the Stanly News & Press in 2010 that he was eating lunch at home in Badin when the plane flew over so low that “it sounded like it was coming right through the house.”

Adkins said he and other workers from Alcoa’s Badin aluminum works ran outdoors to watch the plane fly over the lake. As it began to turn, “both (a co-worker) and I said it’s going to crash because it was way too low,” Adkins recalled.

A wing hit the water, he said, and the plane smashed into the lake.

Family and friends rushed to the shoreline in hopes of saving the crew. Adkins, who believed the pilot might have been a childhood friend, and two other men stripped to their underwear and dove into the water. But nothing surfaced except part of a wing, the forward landing gear and papers identifying the aircraft.

The rest sank in the deepest part of the 5,300-acre lake, a murky tangle of still-standing trees and sediment up to 200 feet down, near the Badin dam.

Military investigators dismissed engine failure as the cause and ruled the crash was pilot error.

Salvage teams recovered several large pieces of the wreck after underwater dynamite charges unleashed a trail of hydraulic fluid from the lake bottom. Recovery teams worked at the crash site for more than a month. But divers feeling with their hands in the black depths never found the bodies of McDaniel and Withrow.

McDaniel’s widow grieved for years, Coble wrote, and died in 1986. A headstone for Charles McDaniel is in a family plot in Palmerville.

“I don’t think my father ever got over it,” the pilot’s sister, Rebecca McDaniel Sykes of Thomasville, told The Observer in 1999. “We could see the lake from our house. But he would go out and sit in the pasture and watch and watch and watch them until the (salvage) boats would come back to shore.”

A half-century passed. Coble’s parents moved to the area and heard about the bomber. Coble, who has a master’s degree from East Carolina University and had devoted much of her career to working with sunken aircraft, began researching the crash.

“There’s a story here to tell,” she told the Observer in 1999. “I’m intrigued by the fact this plane hasn’t been seen since 1944 and we have a good chance to find out what happened.”

Charlotte’s Carolinas Historic Aviation Commission, among others, backed Coble’s plan to find the plane. The Naval Historical Center and an underwater survey company offered equipment and a Florida archaeological firm was hired. Supporters raised $5,000 for a four-day expedition.

Magnetometers and side-scan sonar found scattered metal on the lake bottom. Grainy sonar images revealed parts, including a 25-foot long section that could match the bomber’s fuselage and another section that could be its separated tail.

Media coverage drew other salvors who promised to find the plane. Nine months after Coble’s search, a Stanly County commercial diver claimed that a small submarine had located the wreck, but took no photographs. A search by a Navy Reserve team was plagued by problems.

Circumstantial evidence, Coble concluded in her report, “weighs heavily” in favor of the bomber’s wreckage having been located. She found it highly likely that as McDaniel swooped low over the lake before climbing to fly over his parent’s house, the right wing dipped and plunged the plane into the lake at high speed.

It’s possible, she wrote, that the crewmen were still strapped in when their seats were hurled from the wreckage. Money left over from Coble’s search paid for the memorial to them that now stands in Badin.

Nearly 20 years ago, McDaniel’s sister Rebecca had liked the idea of having “a little something done” for the lost crew.

“We’ve always said, that’s his burial plot, the lake,” she told the Observer then. “He always loved the water. And we’d always look there, and there he would be.”