The legendary B-52H Stratofortress has been raining bombs down on terror targets across the Middle East and Southwest Asia like... 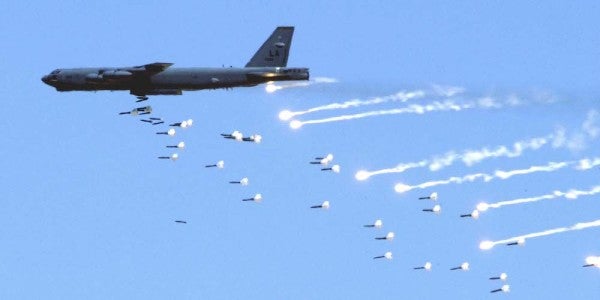 The legendary B-52H Stratofortress has been raining bombs down on terror targets across the Middle East and Southwest Asia like there’s no tomorrow. The Air Force wants to ensure it can rain down even more.

A new request for information (RFI) from Air Force Materiel Command details a need for an external weapons pylon that will quadruple the maximum weight that the B-52 can haul under its impressive wingspan from 10,000 lbs to 40,000 lbs, according to Jane’s 360. But the new upgrade is less about the number of munitions and more about the type.

A B-52 Stratofortress from Barksdale Air Force Base, La., drops live ordnance over the Nevada Test and Training Range near here May 12 during an Air Force firepower demonstration.U.S. Air Force/Senior Airman Brian Ferguson

“The current Improved Common Pylon (ICP) … was designed in 1959 and has been in service since the 1960s,” the RFI notes. “When it was introduced, there wasn't a requirement nor did anyone foresee a need to carry weapons heavier than 5,000 lb. It was modified in the late 1990s … and has performed exceptionally well … it has limitations when it comes to heavy weight capacity.”

As Jane’s notes, the new pylon “would enable the B-52 to carry any of the air-launched munitions in the USAF inventory up to the 22,000 lb Massive Ordnance Air Burst (MOAB) bomb” that U.S. forces in Afghanistan are debating once again deploying against terror targets there.

The B-52’s weapons systems have enjoyed some delightfully explosive updates in recent years. In December 2017, a Stratofortress set a record for the most precision munitions ever deployed by the airframe in thanks to the expanded payload offered by the brand-new Conventional Rotary Launcher (CRL).

The CRL is part of a $163 million 1760 internal weapons bay upgrade (IWBU) the Air Force is working to shanghai into the airframe, increasing the B-52’s carriage capacity by some 66% as part of a modernization roadmap designed to keep the B-52 heavily in the fight until through at least 2050.

“Right now, the B-52 carries the largest range of munitions of any platform out there,” as Air Force Global Strike Division acquisition chief Eric Single told Task & Purpose last year. “This just allows you to carry more.”