The Air Force has just 7 B-1B Lancer bombers ready for war. It’s supposed to have 10 times as many

The Air Force's B-1B Lancer long-range bomber is supposed to be one of three critical strategic bombers in the Pentagon's inventory. At the moment, however, the Air Force's Lance fleet is an embarrassing mess 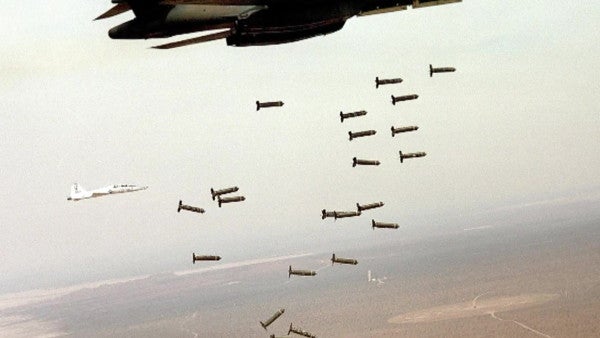 The Air Force's B-1B Lancer long-range bomber is supposed to be one of three critical strategic bombers in the Pentagon's inventory. At the moment, however, the Air Force's Lancer fleet is an embarrassing mess.

During the Senate Armed Services Committee confirmation hearing for Gen. John Hyten on Tuesday, Sen. Mike Rounds (R-Sd.) stated that of the Air Force's fleet of 61 Lancers, only six are full mission-capable, with 39 down for inspections and an additional 15 in depot maintenance

The reason for this disrepair is simple, Hyten said on Tuesday: the B-1B is overextended and under-maintained.

Indeed, Hyten's assessment echoes that of AFGSC commander Gen. Timothy Ray, who told a group of reporters in Washington, D.C. this past April that the Air Force had “overextended” the fleet in the U.S. Central Command area of operations over the last decade.

“Normally, you would commit — any bomber or any modern combat aircraft — about 40 percent of the airplanes in your possession as a force, in depot,” Ray explained at the time. “We were probably approaching the 65 to 70 percent commit rate well over a decade.”

“The wear and tear on the crews, the maintainers, and certainly the airplane, that was my cause for asking for us to get out of the CENTCOM fight,” he added.

The precipitous drop in readiness is alarming to say the least. As Air Force Times previously reported, the Air Force's most recent batch of aviation readiness data from fiscal year 2017 showed a 52.8% mission-capable rate for the B-1b, with 32 or 33 bombers ready for action at a given moment.

But ever since B-1Bs returned to the Middle East in April 2018 for the first time in nearly two-and-a-half years to take over strike missions from the B-52 Stratofortress, the airframe has experienced two fleet-wide groundings, one in June 2018 and the other in March 2019, due to ejection seat issues.

While AFGSC told Air Force Times in June that an “extensive engineering review” of the entire B-1B fleet is current underway, getting those back in the air can't happen soon enough. In it's markup of the fiscal year 2020 defense budget, the House Armed Services seapower and projection forces subcommittee explicitly recognized that the Pentagon's long-range strike capabilities “may be placed at increased risk by aging structural problems” with the B-1B. That's bad news for the Pentagon — and good news for everyone else.