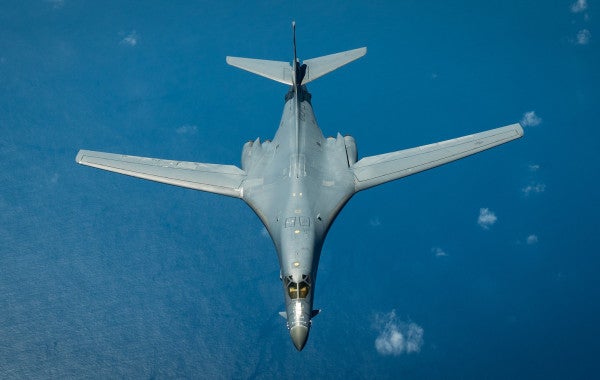 Buckle up. The Air Force's favorite non-nuclear bomber may soon boast an arsenal of hypersonic missiles to scare the bejeezus out of America's adversaries.

The ARRW, currently undergoing rapid development following an August 2018 contract award to Lockheed Martin, uses a rocket booster to deliver an unpowered glide vehicle into the Earth's atmosphere, per the War Zone, a warhead that then descends onto a target on an unpredictable flight path and at speeds of up to Mach 5.

“My goal would be to bring on at least a squadron’s worth of airplanes modified with external pylons on the B-1, to carry the ARRW hypersonic cruise missile,” Ray told Air Force magazine, noting that some of the aging airframes “will need significant structural work” in order for the modifications to take place.

“There are several versions that we could contemplate, but we believe the easiest, fastest, and probably most effective in the short term will be to go with the external pylons,” he added.

The service is already in the process of experimenting with external B-1B carriage options. In August 2019, AFGSC and the 412th Test Wing showcased both long bay and external carriage options that would allow the Lancer to haul ” larger, heavier munitions, such as hypersonic weapons,” according to a release from Edwards Air Force Base in California.

The goal of the Lancer upgrade, Ray reportedly said during a phone call hosted by the Defense Writers Group following his conversation with Air Force magazine, is to enable the B-1B to carry at least six ARRW hypersonic missiles while leaving the aircraft's bomb bay open to haul conventional missiles like the Joint Air to Surface Stand-Off Missiles-Extended Range (JASSM-ER), as well as the Long Range Anti-Ship Missile (LRASM).

The United States is currently in the middle of a hypersonic arms race against 'great power' competitors Russia and China. Russia has conducted tests of both its 3M22 Zircon (Tsirkon) and Kh-47M2 Kinzhal (Dagger) hypersonic missiles in recent months, while China flaunted its DF-17 hypersonic glide vehicle during a military parade last October.

But the hypersonic upgrade comes during a twilight for the long-range heavy bomber: The Air Force reportedly plans on retiring 17 of its fleet of 60 B-1B bombers as part of a broader push to free up new funds for fresh capabilities like the F-35 Joint Strike Fighter, the F-15EX fighter jet, and the B-21 Raider stealth bomber, according to Foreign Policy.

Indeed, the readiness of the B-1B fleet is, as far as anyone knows, in the toilet. In July 2019, AFGSC revealed that just seven of the service's B-1Bs are fully mission-capable, a dismal 11% readiness rate; according to Air Force Gen. John Hyten, 39 aircraft were down for inspections while an additional 15 were in for depot maintenance.

The reason for this disrepair, as Hyten told the Senate Armed Services Committee at the time, was the overextended and under-maintained status of the service's high-demand B-1B fleet.

The B-1B isn't the only bomber the Air Force is eyeing for a hypersonic upgrade: the same month that AFGSC detailed the Lancer's readiness issues, the command oversaw the successful test flight of the ARRW from a B-52 Stratofortress at Edwards AFB.

“We’re using the rapid prototyping authorities provided by Congress to quickly bring hypersonic weapon capabilities to the warfighter,” assistant secretary of the Air Force for Acquisition, Technology and Logistics Dr. Will Roper said in a statement at the time. “We set out an aggressive schedule with ARRW.”