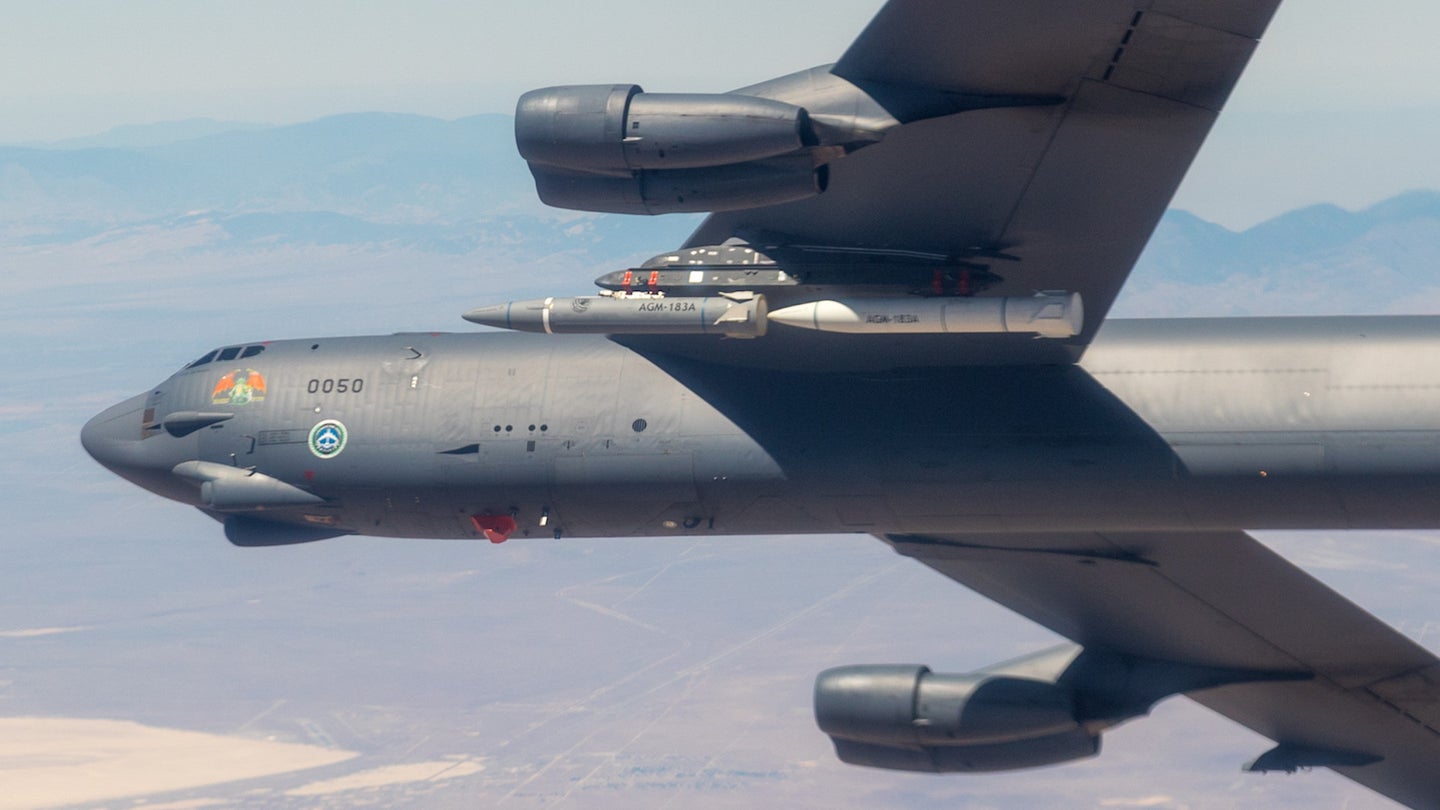 Just seven months after conducting its first successful flight test, the Air Force has carried out its first end-to-end trial of its newest hypersonic weapon using a fully operational prototype missile, the service announced on Monday.

A B-52H Stratofortress assigned to the 412th Test Wing at Edwards Air Force Base in California successfully released the first “All-Up-Round” fully operational AGM-183A Air-launched Rapid Response Weapon (or, more succinctly, ARRW) off the state’s southern coast on Dec. 9, the service said in a press release.

Technical details on the ARRW are obviously scant due to operational security, the hypersonic weapon is billed as “[an] air-launched hypersonic glide vehicle prototype capable of traveling at average speeds of between Mach 6.5 and Mach 8 at a range of approximately 1,000 miles,” according to the Congressional Research Service.

The ARRW “is designed to enable the U.S. to hold fixed, high-value, time-sensitive targets at risk in contested environments,” according to the service’s press release.

While previous tests of the ARRW — like the service’s much-publicized first successful launch in May following months of failed flight trials — were more focused on booster performance, the latest test saw the weapon reach hypersonic speeds “greater than five times the speed of sound” and follow a set flight path before detonating in a “terminal area,” according to the service.

The trial still represents a major step forward for what may eventually become the first hypersonic weapon in the service’s arsenal.

The development of hypersonic weapons — which travel at speeds multiple times the speed of sound and are extremely difficult to intercept with conventional air defenses — has become a top priority for the Defense Department amid its reorientation towards preparing for a future war against near-peer adversaries like Russia and China.

“The ARRW team successfully designed and tested an air-launched hypersonic missile in five years,” Brig. Gen. Jason Bartolomei, Armament Directorate Program Executive Officer, said in a statement.  “I am immensely proud of the tenacity and dedication this team has shown to provide a vital capability to our warfighter.”

When the ARRW might actually end up hanging from the wings of deployed B-52s, however, remains to be seen. While the Air Force originally requested $46.6 million to procure a single ARRW system as part of its fiscal year 2023 budget request, the House-approved National Defense Authorization Act that will likely end up as law zeroes out procurement for the weapon for the year.

The reason? As Breaking Defense reported, that money is going back into research and development for the ARRW, although Air Force officials insisted that the service is “not walking away” from the hypersonic weapon despite a lack of future planning to buy it.

The Air Force had previously requested $161 million in fiscal year 2022 to buy its first raft of 12 ARRW missiles, but the 2022 NDAA ended up funding procurement to the tune of $116.9 million over concerns the program had become “increasingly delayed and compressed” following earlier failed tests according to budget documents.

The ARRW isn’t the only hypersonic weapon in the mix for the Air Force at the moment. In September, the service awarded defense giant Raytheon a $985 million contract to “develop and demonstrate” prototypes of the Hypersonic Attack Cruise Missile (HACM), described as “an air-launched, scramjet-powered hypersonic weapon.”

The Air Force plans on delivering “a HACM capability with operational utility, whatever that means, by the fiscal year 2027, according to the service.

The Air Force had previously canceled its  Hypersonic Conventional Strike Weapon program — envisioned as “ a long-range stand-off missile capable of being launched from an aircraft and traveling faster than speeds of Mach 5,” per Defense News — due to budget pressures that forced the service to choose between the HCSW and the ARRW.