The Air Force is officially working to replace its inventory of up-armored Humvees with the Army's new Joint Light Tactical Vehicle, the service announced on Monday 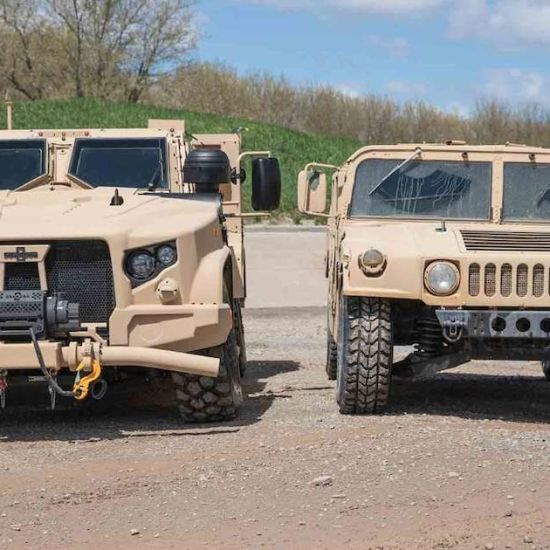 The Air Force is officially working to replace its inventory of up-armored Humvees with the Army’s newest battlewagon.

The Air Forces’ Agile Combat Support Directorate is working with the Army to acquire and field approximately 3,230 Joint Light Tactical Vehicles (JLTV) starting in 2021, the service announced on Monday.

Developed based on the U.S. experience fighting in Iraq and Afghanistan and designed to provide better protection against improvised explosive devices, the Army first fielded the JLTV to soldiers in January 2019.

In the service of the Air Force, the JLTV function as the primary tactical vehicle for the security forces tasked with guarding missile silos and launch facilities, aiding in explosive ordnance disposal, and backing up the Guardian Angels tasked with personnel recovery.

The ACSD is angling to pick up three different JLTV variants, including a general-purpose vehicle, utility vehicle, and a heavy guns carrier vehicle for a variety of functional missions, according to the Air Force.

“The JLTV is much more capable than the Humvee,” Al Bello, chief of the division’s Mobility and Vehicles Branch, said in a statement. “Besides the technological advances, the ride and comfort of the vehicle is so much better, especially when you are going over uneven terrain.”

The Air Force has been eying the JLTV since at least 2017, when the service quietly requested 140 vehicles as part of its fiscal year 2018 budget request.

According to the Air Force, the new vehicles will start coming off the production line in January 2021 ahead of their fielding to Air Force units around September of that year. But don’t expect to see them in your motor pool for at least a few years.

“This is a long-term program, and we’ll be buying [JLTVs] through possibly 2045,” said Bello in a statement. “There are a lot of Humvees out there that are still in good shape. We’ll replace approximately 125-150 per year through attrition.”

Related: It took the Army 4 years to field the JLTV. It took soldiers 4 days to total one