The Air Force is on the hunt for a Jetsons-style flying car, and service officials just got an eyeful of one of their very first prototypes 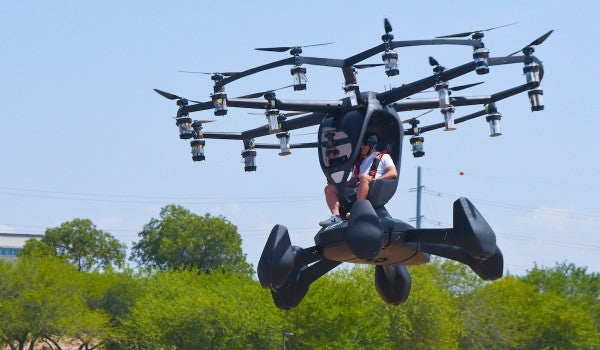 The Air Force is on the hunt for a Jetsons-style flying car, and service officials just got an eyeful of one of their very first prototypes.

The demonstration, which involved a prototype Hexa multirotor aircraft developed by Texas-based LIFT Aircraft, was facilitated by the Texas National Guard and AFWERX personnel as the first in the program's “Air Race to Certification,” according to the Air Force.

Indeed, LIFT had announced its Agility Prime partnership in April to help the firm “advance flight testing, airworthiness & safety, and ultimately, certification” of its unique aircraft, which looks like a golf cart hoisted into the air by a team of drones.

First announced in September 2018, the Air Force in February issued a solicitation for industry proposals for Agility Prime program prototypes that are “typically characterized by employment of distributed propulsion for vertical flight and potential use of a wing for horizontal flight.”

As Defense One previously noted, the Air Force's newfound push for a “flying car” grew out of a desire among U.S. special operations forces for a high-speed, semi-autonomous platform with “an ultra-low noise insertion signature to ferry warfighters through battlespaces too contested for conventional vertical-lift aircraft.”

“We went back to [Air Force Special Operations Command] and said, 'We can also look more broadly at where commercial innovation is going in flying cars and see what's possible,'” Dr. Will Roper, assistant secretary of the Air Force for acquisition, technology and logistics, said of the program. “It may not be able to do the full mission of the Osprey but it has a lot of compelling options, especially in logistics.”

At the moment, the Agility Prime program is less about developing new prototype eVTOL vehicles and more about engaging private-sector companies to develop innovative technologies and compete in a challenge-style competition on U.S. military testing ranges.

As Breaking Defense noted back in February, Agility Prime is both an opportunity for the Air Force to check out new prototypes and a chance for commercial firms to “[avoid] the need to go through the time-consuming safety certification” from the Federal Aviation Administration, which is the exact reason LIFT stated for entering into the partnership in the first place.

“In the case of EVTOL, we see numerous companies that are pushing really cool technology that has the chance to really change the world, but their challenge is getting certification and safety,” Roper said at the time.

“So, the value proposition we have with those companies isn’t our R&D money — they’re flush with cash from private investors — our value proposition is our test ranges our safety and air worthiness certification.”

According to the Air Force, the flight at Camp Mabry will be the first of many: the service has seen more than fifteen aerospace firms apply to partner with the Agility Prime program and furnish the service with prototypes, according to AFWERX director and Agility Prime lead Col. Nathan Diller.

“This flight today marks the first of many demonstrations and near term flight tests designed to reduce the technical risk and prepare for Agility Prime fielding in 2023,” Diller said of the Aug. 20 demonstration.

The Air Force is spending $25 million this year on Agility Prime allocated under the fiscal year 2020 defense budget, according to Inside Defense.