“You’re in something that’s releasing an enormous amount of energy that’s unlike anything else out there.” 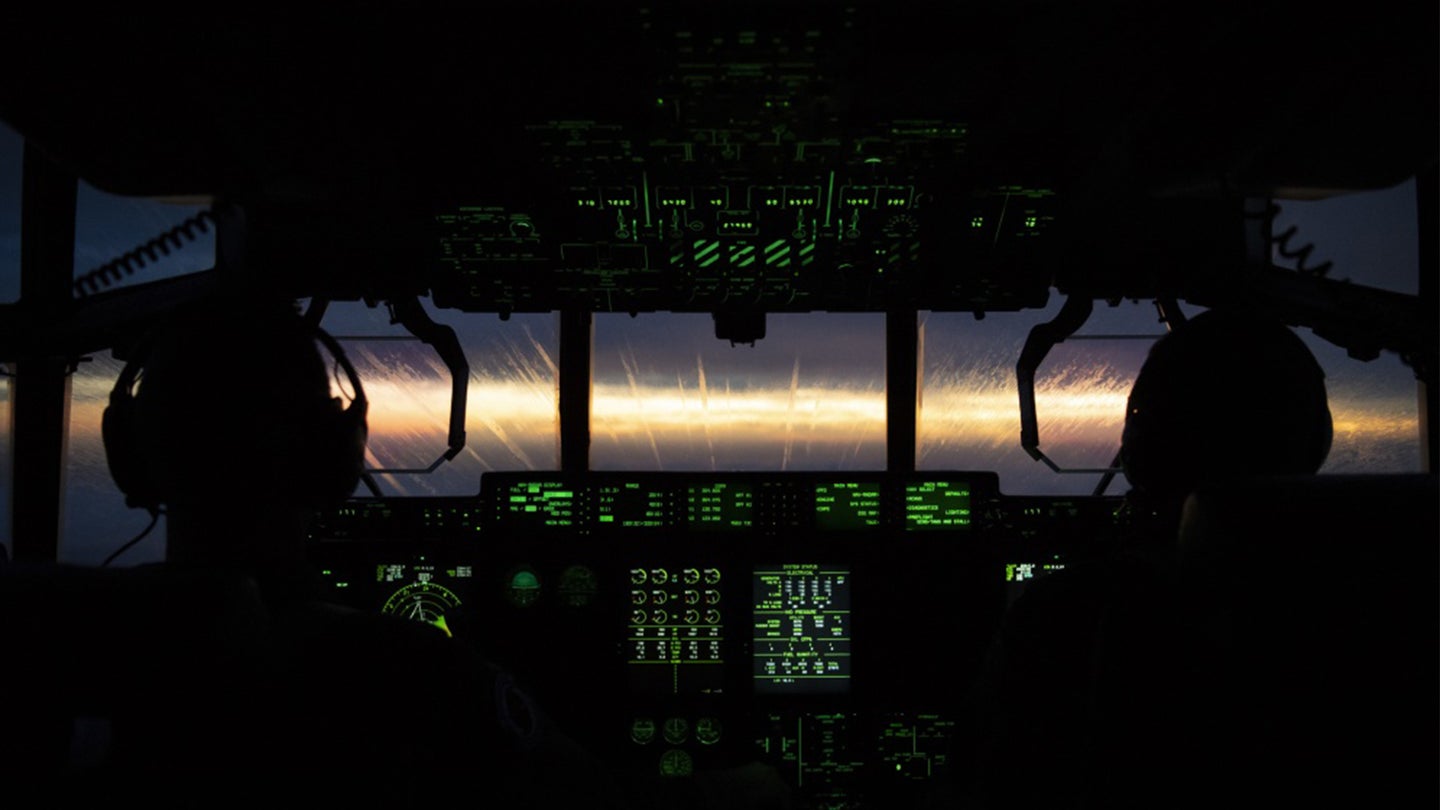 Imagine you are flying in an airplane through the worst turbulence you can think of, with the plane dropping 200 feet in the blink of an eye and the fuselage itself flexing all around you. Then imagine you can’t see out the window because it’s the middle of the night and it’s pouring rain outside. But don’t worry, you can still smell the sharp, chlorine-like tang of ozone as static electricity builds up on the aircraft from all the precipitation. If you’re lucky, you might even see a brilliant white flash followed by a loud bang in the rare chance lightning hits the aircraft. But no matter, the plane presses on, because you’re on a WC-130J aircraft assigned to the Hurricane Hunters of the 53rd Weather Reconnaissance Squadron, and your job is to keep flying until you reach the eye of the storm.

“You check over everything like ‘okay did we get hit, is there any damage to the plane?’ And then you know, you press on from there,’” said Air Force Lt. Col. Mark Withee, a seasoned navigator with the 53rd, about what it’s like after the aircraft gets hit by lightning. “We are looking at the radar to try to avoid those areas that might be more dangerous, but ultimately our mission is to fly through the storms, and there are some risks inherent in doing that.”

As a C-130 navigator, Withee is no stranger to rough flights. He spent much of his career deployed to Iraq and Afghanistan, flying low to the ground, between mountains and through combat zones. After all that, what a civilian might call severe turbulence is merely a bumpy ride to him. Even so, a hurricane is nothing to joke about.

“There’s been talk about whether you can use nuclear weapons or other things to divert hurricanes, and the response is typically that the hurricane is releasing the equivalent of multiple nuclear weapons every hour,” Withee said. “You’re in something that’s releasing an enormous amount of energy that’s unlike anything else out there.”

That’s the reason why the Hurricane Hunters are so important: throughout the summer they fly into hurricanes to collect data on the storms that satellites can’t. The WC-130J aircraft the 53rd fly are modified cargo planes with four propeller engines and a suite of special sensors to pick up data on humidity, wind speed, wind direction, temperature, air pressure, dewpoint and other elements which help scientists at the National Hurricane Center figure out where the storm is heading and when it will get there.

“The number they commonly use is that we increase the accuracy of the models by 30%,” Withee said. “You’ve probably seen the cone of where a hurricane might be headed. It’s a pretty big path, but reducing that by 30% reduces a lot of burden for people.”

It costs about a million dollars to evacuate a mile of coastline, Withee said, so having fewer miles of coastline to evacuate means a smaller financial burden on coastal communities across the southeastern United States, as well as other countries in the Caribbean and Latin America. On the other hand, accurately modeling a hurricane’s path can also save the lives of countless people in its sights.

“I can’t think of anything quite the same in my previous flying, except for medevac missions, where you can go fly a mission and you can see how that is helping people make critical life decisions very soon afterwards,” Withee said. “Flying through a big hurricane headed towards a populated area has a sort of personal sense of helping out our fellow Americans as they figure out how to best tackle the threat from an unstoppable force of nature.”

Flying into a hurricane might seem like a risky proposition now, but the first hurricane hunting mission was far more scary. It was July 27th, 1943, and U.S. Army Air Forces Col. Joe Duckworth made a bet with a group of British fighter pilots training at Bryan Field, Texas, that he could fly their new AT-6 Texan trainer aircraft into the eye of an approaching storm and back without incident. He and a navigator, Lt. Ralph O’Hair, pulled it off without telling headquarters, though Duckworth compared the experience to “being tossed about like a stick in a dog’s mouth,” according to the National Weather Service.

With that bet, Duckworth proved that flying into hurricanes was possible. That marked a major step forward for weather forecasting, which has shaped many battles throughout history. In the decades after Duckworth’s flight, the United States launched several weather reconnaissance aircraft squadrons, but as satellite technology advanced, that number whittled down to two: the 53rd and the National Oceanic and Atmospheric Administration’s Hurricane Hunters, who perform similar missions but capture different slices of data on storms.

While hurricane hunting is the 53rd’s most widely-known mission, it’s far from the only one. When hurricane season ends on November 30, the squadron tracks winter storms closing in on the U.S. east coast. Then, starting around mid-January, a few of the squadron’s ten planes and crews fly to California to study atmospheric rivers, which spray water across the west coast.

Understanding those rivers helps California manage its routine droughts, Withee explained. Then, around the end of March, it’s back to Keesler Air Force Base, Mississippi, to get ready for the start of hurricane season in June.

“We have missions year-round, it’s just the winter stuff doesn’t have the sex appeal of flying through hurricanes,” the navigator joked.

Like Col. Duckworth’s bet to fly into a storm, Withee’s move to hurricane-hunting happened partly by accident. Navigation is not a growth career field in the Air Force, he explained, especially since later-model C-130s have advanced GPS and other systems which make his job obsolete. But the 53rd still operates earlier-model aircraft, so Withee had a job there. Plus, the 53rd is a reserve outfit, which means an easier pace of life than active duty.

“It’s a totally different mission set,” Withee said. “We don’t fly low-level through mountains, we don’t do airdrops like normal C-130s, we don’t fly combat missions. So it’s different, but it’s a very awesome mission to go do.”

At least, once you get used to it. Second Lt. Christopher Carranza, a public affairs officer for the 403rd Wing (of which the 53rd is a component), said his ridealong with the Hurricane Hunters was among the scariest flights he’s ever been on.

“I’ve been in some combat takeoffs and landings, but you don’t feel the aircraft bend” like you do in a hurricane, said Carranza, who has a background in security forces, the Air Force equivalent of military police. “There are situations where you just grab the cargo netting because you just want to hold on to something in the back of a hurricane flight. You can feel the aircraft flex, and I didn’t know it could do that … there is that time when it’s pure terror.”

Withee added that you can also see the wings of the WC-130 flexing in the wind, at least when you can see the wings at all through the pouring rain or hail. But not all storms are that bad, Withee said. In fact, hurricane hunting is usually less like The Perfect Storm and more like a long ride on Spirit Airlines.

Of course, there are other times when the aircraft is surrounded by lightning and it might drop a thousand feet in the blink of an eye because that’s just what the mass of air surrounding it felt like doing. That’s an unusual drop, Withee said, but it’s not unheard of. Meanwhile, the pilots can’t see out of the cockpit in the middle of an intense storm, so they work together with the navigator and the weather officer to fly past particularly dangerous areas.

“The key is flying through safely, and we’ve got some pretty good techniques after doing this for quite a few years,” Withee said.

The Air Force hasn’t lost a hurricane hunter flight since 1974, when six men flying a WC-130H, an earlier version of the WC-130J that Withee and his teammates fly, went missing over the South China Sea while tracking Typhoon Bess. The Air Force learned a lot from that disaster, which is part of why no crew has been lost since, Withee explained.

“Technically we do carry parachutes on the plane, and we joke a lot about that, because the parachute isn’t really going to do you much good,” in the middle of a hurricane, he said. “It’s really more for en route. Once we’re in the storm environment, if something goes really wrong, it could potentially be outside of our abilities. It’s something much larger than us, so we really have to do everything professionally and be on top of our game to do what we do safely.”

There are times when an aircrew has to leave the storm because it’s too dangerous. But for the most part, all the turbulence, rain, lighting and other effects of wrestling with a titanic force of nature are not enough to deter Withee and the rest of the 53rd from pressing on to the center of storms that can devastate local communities.

After all, being a reserve unit, most members of the 53rd have family members or friends who live in the path of the storms they track. Withee’s family was among them as Hurricane Florence approached the Carolinas in 2018.

“In some cases, like with Florence [the data we collect] means that now the cone for where the hurricane is going no longer impacts where my family lives in coastal South Carolina,” Withee said. “But it’s not just about my family, it’s everybody’s family … it’s nice to have a job where you can see people benefiting from it in a pretty immediate manner.”