As the United States attempts to extricate itself from three separate conflicts in the Middle East, Florida Sen. Rick Scott would love to see the U.S. military charge headlong into Venezuela's ongoing political crisis 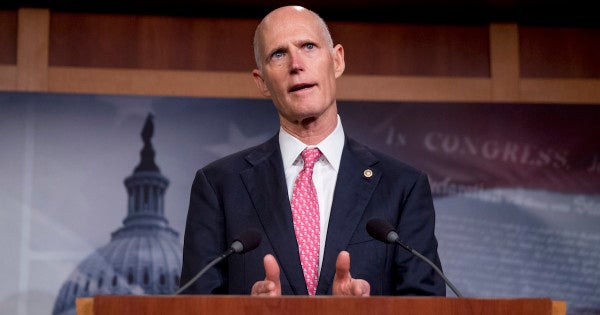 As the United States attempts to extricate itself from threeseparateconflicts in the Middle East, Florida Sen. Rick Scott would love to see the U.S. military charge headlong into Venezuela's ongoing political crisis.

Speaking at the American Enterprise Institute in Washington on Thursday, the former Florida governor and Navy veteran stated that the U.S. military should take action to ensure that $60 million worth of U.S. humanitarian aid — transported by supporters of opposition leader Juan Guaidó and held in limbo at the Venezuela-Colombia border for months by forces loyal to President Nicolas Maduro — reaches its intended recipients in the country.

“There is only one option left to get aid to the people of Venezuela. It is something that no one is willing to talk about,” Scott said. “It is becoming clear that we will have to consider the use of American military assets to deliver aid. Maduro and his thugs have left us no choice.”

“If sanctions can cripple the Maduro regime, we must continue on that path,” he added. “But so far, sanctions alone aren't stopping the Maduro regime and the United States needs to start considering the use of military assets to bring aid to the millions of starving and sick Venezuelans,” Scott said. “And I call on all of our allies and those supporting Guaidós to help us in this effort.”

Scott's comments came weeks after a pair of Russian military aircraft landed at Venezuela's main airport with nearly 100 troops aboard, prompting Secretary of State Mike Pompeo to warn Russia that the U.S. would “not stand idly by” as Moscow turned Maduro into a regional puppet.

Russia and China have continued to recognize Maduro as Venezuela's legitimate leader, while President Donald Trump backed Guaidó back in January, vowing to “use the full weight of United States economic and diplomatic power to press for the restoration of Venezuelan democracy.”

Scott warned that adversaries like Russia and China, the chief subjects of the Pentagon's resurgent focus on so-called Great Power competition, may look at a lack of a military response on the part of the United States as a sign of weakness.

“Our adversaries question our will and our determination,” Scott said. “Put simply, they don't think we're serious.”

This seems … ill-advised? According to an recent RAND Corporation analysis 145 distinct U.S. military interventions conducted between 1898 and 2016, the United States achieves the political objectives of foreign interventions about 63% of the time, with “clear failure” rate of just 8% of the time, which don't seem like totally appealing odds for a country sick of war.

But that success rate had fallen since World War II as the number of foreign interventions abroad exploded. The U.S. military's objectives “have tended to become more ambitious over time, and this shift has corresponded with a gradually decreasing likelihood that objectives will be successfully achieved,” according to the report.

Scott may be a Navy man, but his proposed military intervention is pure Florida Man: overly ambitious, egregiously reckless, and not likely to end well.