No signs of an imminent US invasion of Venezuela as Maduro stays in power, for now

At the moment, it does not appear that the Pentagon is prepared to go full Leroy Jenkins and deploy the 82nd Airborne Division over downtown Caracas. 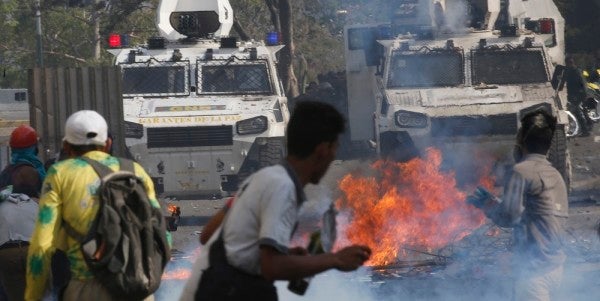 It may be too soon for your friend and humble Pentagon correspondent to submit an embed request for Operation Venezuela Libre, but the Pentagon is certainly thinking about what's going on south of the border.

On April 30, it appeared as though Venezuela's dictator Nicolas Maduro was about to fall when opposition leader Juan Guaidó appealed to Venezuelan armed forces to join him.

Top defense and national security officials have mostly spent the past week in meetings most recently, Pompeo, National Security Advisor John Bolton, and Acting Defense Secretary Patrick Shanahan confabbed on the morning of May 3 at the Pentagon.

But speaking with reporters afterward, Shanahan declined to say if the administration is considering a military intervention in Venezuela.

“We have a comprehensive set of options tailored to certain conditions and I'm just going to leave it at that,” Shanahan said.

When a reporter asked specifically if those options include attacking Venezuela, Shanahan replied cryptically: “I'll leave that to your imagination. All options are on the table.”

Shanahan was also coy about the possibility that the United States could send warships to the region, saying, “All options are comprehensive, but there's a lot of water.”

At the moment, it does not appear that the Pentagon is prepared to go full Leroy Jenkins and deploy the 82nd Airborne Division over downtown Caracas. When you consider that the 1989 invasion of Panama involved nearly 26,000 U.S. troops, you get an idea of how many service members it would take to subdue the Maduro regime, which would almost certainly resort to insurgent tactics. (Let's also not forget that the Pentagon is so over counter-insurgency operations.)

“To date, most of our actions have been diplomatic and economic,” Marine Gen. Joseph Dunford, chairman of the Joint Chiefs of Staff, told lawmakers on May 1. “We are doing what we can now to collect intelligence and make sure we have good visibility with what is happening down in Venezuela and also be prepared to support the president should he require more from the U.S. military.”

Given the current situation on the ground, it is unlikely that the U.S. military will invade Venezuela, but it may be called upon to evacuate any American citizens who live in the country, retired Navy Adm. James Stavridis, former head of U.S. Southern Command, told Foreign Policy's Lara Seligman.

“To do an evacuation of tens of thousands would require control of an airfield, control of ports—all of that would require a military effort,” Stavridis said. “I suspect those kinds of options are being looked at very strongly.”

As last week drew to a close, Maduro remained in control of Venezuela. What happens next to Guaidó and the opposition is unclear. Turkish President Recep Tayyip Erdoğan used a failed 2016 coup to arrest thousands of perceived opponents in that country's military and civil service.

The Washington Post reported that Guaidó's bold plan could have been doomed from the start because Maduro may have learned about it before everything was in place. By the end of April 30 , it became clear that Maduro still had the support of most of Venezuela's military and security forces.

However, Stavridis told Task & Purpose that the uprising was not a total failure.

“Put yourself in Maduro's position,” Stavridis said. “You now distrust your highest tier of immediate subordinates; you are still facing massive infrastructure problems throughout the country; you've got the United States breathing down your neck. If I were advising Nicolas Maduro, I would tell him there are many, many challenges ahead. I think this game is going to be longer term and I think it's more about months than weeks or days.”

SEE ALSO: Watch This Reporter Almost Get Run Over By A Russian Bomber