What the hell is going on in Venezuela? An explanation

"I don't think the White House staff said: 'Hey, we can get a war going in Venezuela. It will throw manure on your trail.'" 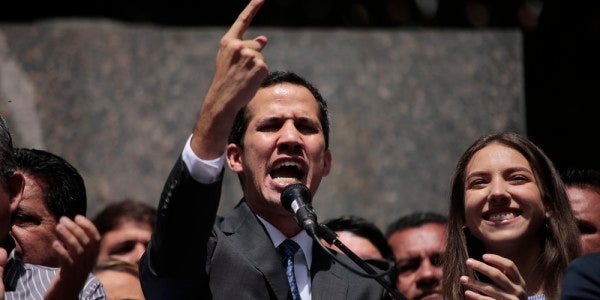 Beloved readers: Your friend and humble Pentagon correspondent has been spending the last week trying to figure out why in the name of the Risen Mattis that Venezuela has suddenly become a national security hotspot.

As far as your dimwitted reporter can determine, neither the Taliban nor Al Qaeda nor ISIS have established a caliphate in the Bolivarian Republic. None of North Korea's nuclear weapons or ballistic missile facilities have been moved south of the border. And Caracas is the one place where Iranian Maj. Gen. Qasem Soleimani hasn't taken a selfie – yet.

But the Trump administration, seemingly unfulfilled dealing with these simultaneous crises all over the world,is now committed to helping the Venezuelan people pass a gigantic kidney stone known as Nicolas Maduro, the dictator who has ruled the country since former Jefe In Chief Hugo Chavez went to the great socialist revolution in the sky in 2013.

Under Maduro's inspired leadership, the Venezuelan economy has been in a state of collapse for nearly five years. Inflation is set to top 10 million percent this year and most Venezuelans cannot get food, fuel, or medical care. (Maduro was recently awarded the Comrade Spenser Rapone Award for Excellence in Socialism.)

Maduro was declared the winner of Venezuela's presidential election in May – which made Chicago's mayoral elections look like Athenian democracy – yet the Venezuela's internal opposition as well as several outside countries have condemned the process as rigged.

Fidel Castro Jr. – sorry – Maduro was supposed to begin his latest presidential term on Jan. 10, but the National Assembly, Venezuela's Congress, has voided his election and opposition leader Juan Guaidó has declared himself president of an interim government.

On Jan. 23, President Donald Trump officially recognized Guaidó as Venezuela's legitimate leader and vowed to, “use the full weight of United States economic and diplomatic power to press for the restoration of Venezuelan democracy.”

When asked later that day if he was considering using the U.S. military in Venezuela, Trump replied, “We're not considering anything, but all options are on the table.”

Trump had a phone call with Guaidó on Wednesday, “To congratulate him on his historic assumption of the presidency and to reinforce President Trump's strong support for Venezuela's fight to regain its democracy,” according to the White House.

Now comes the question you've all been waiting for: Will the United States invade Venezuela? From what your humble correspondent has been able to find out so far, no invasion force is massing to launch Bay of Pigs II: Electric Boogaloo. (This happens to be the title of Spenser Rapone's mixtape, BTW.)

“State and Treasury are taking a significant number of steps to recognize the National Assembly and President Guaido,” Acting Defense Secretary Patrick Shanahan told reporters on Tuesday. “We are supporting, we're monitoring the situation very carefully and we're watching. And we are working very much in real time.”

Shanahan did not comment on National Security Adviser John Bolton's massive OPSEC fail the day before, when “5,000 troops to Colombia” was clearly visible on his legal pad during a White House briefing.

“I haven't discussed that with [Ambassador] Bolton,” Shanahan said.

“It would also turn into a fight,” McCaffrey said. “I've had a lot of contact with the Venezuelan armed forces and national police. There's no reason to expect that if a foreign power invaded Venezuela they wouldn't fight.”

McCaffrey said he also doubts that Trump is manufacturing a foreign crisis to distract people from his political problems, such as the ongoing investigation into alleged ties between Trump's 2016 presidential campaign and Russian intelligence.

“I don't think the White House staff said: 'Hey, we can get a war going in Venezuela. It will throw manure on your trail,'” McCaffrey said.

However, the potential for conflict remains because the U.S. government has refused Maduro's demands to close the U.S. embassy in Venezuela and remove all diplomats, he added.

The Maduro regime initially told U.S. diplomats to leave the country within 72 hours, but it later backed down and allowed the embassy to remain open as it establishes a U.S. Interests Office in Venezuela.

“We have no plans to close the embassy,” the spokesperson said. “The United States will maintain diplomatic relations with Venezuela through the government of interim President Guaido, who has invited our mission to remain in Venezuela.”

If the United States can force Maduro to step down, it will have removed a fierce opponent in Latin America who has allied himself with both Cuba and Russia, which recently sent strategic bombers to the country – nearly decapitating an eager Russian TV reporter.

McCaffrey praised the U.S. government's strategy of citing a provision in the Venezuela's own constitution that allows the National Assembly leader to declare himself president as justification for recognizing Guaidó as the country's legitimate leader.

“I thought this was really quite inspired – there's no way Trump came up with it,” McCaffrey said. “It was a brilliant move. If they follow it to its extreme, it looks to me as if it may mean in the coming 90 days there's going to be a collapse of the government.”

SEE ALSO: Trump Says US Military Intervention In Venezuela Is 'An Option'