On July 5, the people of Venezuela awoke to yet another chapter in the bizarre saga of Oscar Perez, seasoned... 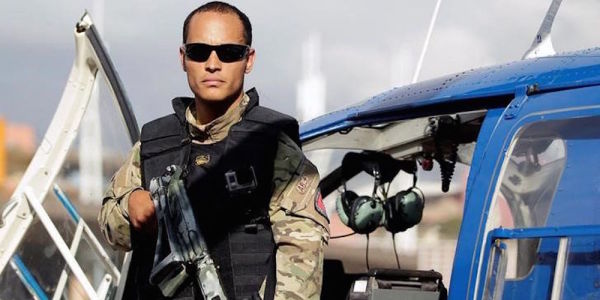 On July 5, the people of Venezuela awoke to yet another chapter in the bizarre saga of Oscar Perez, seasoned policeman, action movie hero, and, depending on whom you ask, either an armed revolutionary fighting to topple the government of socialist strongman Nicolas Maduro or a puppet for the regime disguised as an insurgent.

Perez achieved global stardom on June 27 when he launched an aerial attack on Venezuela’s Interior Ministry and Supreme Court, lobbing grenades and firing rounds from the cockpit of a stolen police helicopter. In a video claiming responsibility for the attack, Perez vowed to fight “the impunity imposed by” Venezuela’s government. And as if his international debut didn’t capture enough attention, he’s just released a sequel, doubling down on his call for a popular uprising.

Perez’s new video, which appeared on YouTube on July 4, is of considerably lower quality than the first, but it adds an extra layer of intrigue to a story that seems torn from the pages of a W.E.B. Griffin novel. According to the tape, Perez and his comrades are back in the capital after ditching the stolen chopper along the coast and trekking back to the city over the mountains. Defiant as ever, Perez declared that he and his squad are “ready and willing to continue our struggle for the liberation of our country.”

His timing is impeccable: Venezuela is in desperate need of a savior. The country’s economy is in ruins, shattered by low global oil prices and a history of mismanagement, foolhardy policies and corruption. Runaway inflation and food and medicine shortages have added to the turbulence, piling tinder on an already smoldering situation. There appears little hope for an orderly political transition: Months of food riots and street protests have pushed Venezuela to the brink of an armed uprising as Maduro and his cronies have worked to tighten their slipping grip on power. Nearly 100 protesters are believed to have died in clashes with police over the past few months as once-peaceful demonstrations have escalated into full-on street battles.

Enter Perez, who served as a captain in the CICPC, Venezuela’s forensics bureau, while moonlighting as one of the country’s most dashing actors. He is perhaps best known for his lead role in the 2015 action film Muerte Suspendido (Suspended Death). Among other general badassery, the movie features Perez jumping out of a plane with a large dog strapped to his chest and taking on bazooka-wielding kidnappers. He’s pretty much a South American MacGruber.

Perez has invested considerable energy in making himself into a real-life Ethan Hunt, filling his popular Instagram account with photos of him doing things like scuba diving with assault rifles and backward trick-shooting using tiny mirrors. He’s also used it to showcase his ability to do actually useful things, like flying helicopters and eating large platters of delicious-looking sushi. The account is a testament to a man’s ability to sculpt a digital personality for himself, one fit to fill any major motion picture screen.

But who Perez actually is remains shrouded in mystery. In many ways, he cuts an almost-too-perfect figure for an insurgent leader. Striking, square-jawed, and bold, the long-time forensic policeman seems like the quintessential underdog hero to star in the ongoing political drama inside Venezuela

However, Perez’s theatrical past and the amatuer execution of the June 28 copter attack have sparked condemnation from a number of anti-Maduro figures, many of whom view him as a helpful distraction for the government at best, or the star of a high-profile false flag operation at worst. Miguel Rodriguez Torres, who previously led the country’s national intelligence service, called the incident “a cheap show” that would only benefit the president. Perez certainly would be a convenient scapegoat for Maduro’s shaky government, and the president pounced on the opportunity to capitalize on the events of June 28, labeling it a terrorist attack that “could’ve caused a tragedy with several dozen dead or injured,” despite the fact that no one was killed or wounded during incident.

While rumors about Perez’s true motives swirl, Venezuela’s catastrophe continues to play out in real time, with no possible end in sight. On July 5, pro-government demonstrators rushed the country’s National Assembly, beating and robbing a number of opposition lawmakers and causing general mayhem inside the congress of what was once the richest country in Latin America, the latest act in the ongoing drama. Barring any major plot twists, the chaos will likely continue unabated.

With Perez on the run and the country in danger of entering a state of full-on pandemonium, a few questions remain. Where will Venezuela’s self-proclaimed savior surface next, and what sort of finale does he have in mind?