“I don’t think most Americans understand the long-term impacts of military service,” Sen. Tammy Duckworth, a Democrat from Illinois, said... 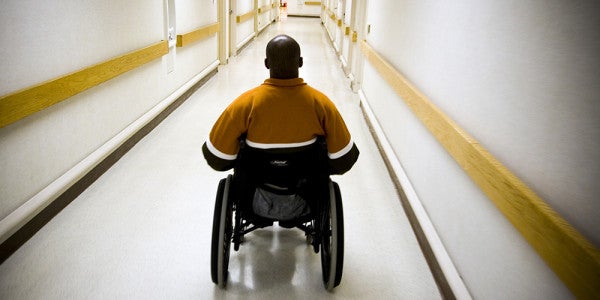 “I don’t think most Americans understand the long-term impacts of military service,” Sen. Tammy Duckworth, a Democrat from Illinois, said during a Disabled American Veterans panel on military caregivers in Washington, D.C., on June 19.

“They just don’t know that when you ask someone to wear the uniform of this great nation, we make a commitment to that person and to that family that we will be there for them for the rest of their lives,” she added.

Duckworth, an Army helicopter pilot and the first female double amputee of the Iraq War, was one of several disabled military veterans to speak at the panel, which focused on the issues facing military caregivers, particularly those who care for veterans injured before Sept. 11, 2001.

“That’s how it should be, because the young man or woman who is downrange right now, getting ready to kick in doors to go kill ISIS, they don’t need to have a minute of doubt that they or their family will be taken care of,” Duckworth said during the panel discussion. “We need to make sure we make that iron-clad guarantee to our military men and women that we will be there for them, and sadly we simply have not when it comes to caregivers.”

For veterans injured after Sept. 11, 2001, and in need of at-home care, they have access to caregiver support through the VA — from stipends to travel expenses, and training in addition to other support and benefits. However, for veterans who were severely injured prior to 2001 and their caregivers, like Dennis Joyner and his wife and caregiver Donna, this support remains out of reach.

“Where would we be without our caregivers? I don’t know,” said Dennis Joyner, a past DAV national commander and a triple-amputee who was injured as a result of a land mine explosion in Vietnam.

“I’ll be honest with you — and Donna’s never heard me say this — but one of my biggest fears in life now is that I would outlive her,” Joyner said. “I don’t know what I’d do. I don’t know if anybody would be able to come and do what she does and care for me.”

As part of its Unsung Heroes Initiative, DAV released a report detailing the disparity in caregiver benefits between post-9/11 and pre-9/11 disabled veterans. Veteran service organizations like DAV are working with lawmakers and the VA to change the policy, and Congress is considering bipartisan legislation to expand VA caregiver benefits to all veterans, regardless of when they served.

For many caregivers, the majority of whom are spouses, it’s a full-time job, but for those caring for a veteran injured before 9/11, there’s little in the way of benefits or support. In Donna’s case, she gave up her job, her pension, and some of her Social Security because of the time out of work she has spent caring for her husband.

Related: Veteran Caregivers Can Be Men, But No One Recognizes That »

Of the 5.5 million caregivers who provide support to current and former service members, roughly 80%, or 4.4 million, are caring for veterans from the pre-9/11 era, nearly half of whom were injured in the Vietnam War, according to the DAV report. The report was based on an online survey conducted by DAV from May 16 to May 22, and collected valid responses from 1,833 disabled veterans and their caregivers.

Over 57% of veteran caregivers are over the age of 55, and as they get older and become more likely to experience health concerns of their own, this puts increased strain on both the veteran and the caregiver.