Exclusive: Here’s What Vets Are About To Get From Trump’s VA

A competition between ideas to reform the Department of Veterans Affairs that’s patterned after the TV reality game show “Shark... 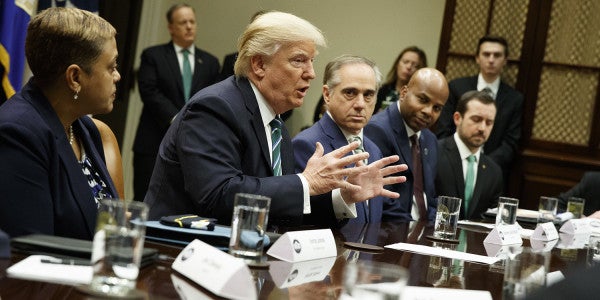 A competition between ideas to reform the Department of Veterans Affairs that’s patterned after the TV reality game show “Shark Tank.” A searchable, Yelp-style website that rates and ranks VA medical centers against nearby private facilities. A beer-brewing magnate who’s new to veterans' advocacy, but is already talking openly about closing some VA hospitals.

These are a few of the Trump administration’s new priorities for the beleaguered VA — and they leave veteran advocates cautiously optimistic, if a little weirded out.

“We’ve been assured by just about everybody we’ve spoken to that wholesale privatization is off the table — everyone pretty much agrees on that.”

In interviews with nearly a dozen officials at the nation’s leading veterans service organizations and in the government, Task & Purpose has learned that the VA is preparing to roll out some new “accountability” features as early as this week, with input from advisers in the nonprofit and private sectors. The changes, which are consistent with VA Secretary David Shulkin’s longtime reform agenda and President Donald Trump’s government-as-a-business mindset, have earned initial praise from veterans advocates in Washington.

But although government officials have privately reassured the VSOs that the VA won’t turn over its services willy-nilly to the private sector, some advocates say they’re watching the new moves closely.

“Reform is happening,” one senior veterans advocate told Task & Purpose, but “we want to make sure it happens in as responsible a way as possible.”

Some of the planned reforms proposed by VA are not new, so much as supercharged versions of old ideas. That’s the case with the department’s “Shark Tank” competition. “That’s actually what they’re calling it,” said Joe Chenelly, executive director of AMVETS, one group that’s helping judge the competition.

“Within the last few weeks, [VA officials] said, ‘Hey, we’d like to get a group from each veterans organization to give their feedback,’” Chenelly told Task & Purpose.

It may sound tailor-made for a president with a background in reality TV game shows, but the idea’s bounced around VA for a while — it was pioneered in the late Obama years by Shulkin when he ran the Veterans Health Administration, as a way for VA employees to spot and correct inefficiencies they saw at work. Now “Shark Tank” Shulkin is apparently expanding the competition and asking veterans advocates for their help.

The program solicits “innovations” — ideas big and small to reform VA’s practices — from internal employees or outside experts, and lets judges review them through a secure online dashboard in “a competitive elimination process,” according to Sherman Gillums Jr., executive director of Paralyzed Veterans of America, one of the groups involved in the judging.

“I’ve already been assigned a set of innovations to review,” Gillums said. “That hasn’t happened before.”

Even veterans groups that aren’t judging in the current “Shark Tank” round have been briefed on the project and spoke about it enthusiastically.

“The innovation idea is something that goes back quite a ways,” said Garry Augustine, executive director of Disabled American Veterans. In 2009, Augustine was part of a panel that judged VA employee innovation ideas with Craigslist founder Craig Newmark. The number-one idea that both men voted for was a disability benefits questionnaire to standardize vets’ claims paperwork — a form that’s still in use today.

“I think it’s a great idea to reach down into the workforce” for reform ideas, Augustine said, adding that, besides generating suggestions from people who know the system’s shortfalls intimately, the competition could bolster “employee pride” — no small thing in a department that’s used to bad press.

The VA is expected to roll out a more novel change in the next few weeks, according to multiple sources: a public-facing, searchable database that rates and ranks every VA medical center and outpatient facility, along with nearby private care facilities. “It’s a real effort to have VA compete with private sector providers,” Gillums said.

“I love this,” Chenelly of AMVETS said. “It’s like Yelp for VA facilities.”

The site will provide data about safety, wait times, and appointment availability at each center. The grading system is expected to work hand-in-glove with an automated, online appointment process that could make it easier for vets to access their care — and harder for VA workers to doctor their appointment books.

Augustine of DAV says the ratings site is part of Shulkin’s push for efficiency through transparency at VA: “He thinks that this will not only help veterans get their care, but it also helps employees understand where they’re falling short.”

“The VA secretary expects there to be bad news, and he embraces it — which is commendable. You can’t be allergic to bad news if you want positive change.”

The VA has graded its facilities on a five-star scale for years, primarily as an internal troubleshooting tool. Those ratings came up for public scrutiny last December when a USA Today investigation revealed them; pressure following the paper’s report led the VA to publish those rankings just before last Christmas.

But adding private facilities into the scoring mix is a new move for the department — one that some watchdogs worry could portend a greater reliance on private-sector care for VA patients down the line, or the outsourcing of key jobs in the department to contractors. “Veterans advocates are all for accountability,” said Paul Sullivan, director of veteran outreach for the Bergmann & Moore law firm, but it has to be done in a way that protects patients and workers.

Gillums of PVA says that tough ratings are part of how the VA has to bring accountability to the system, though. “The VA secretary expects there to be bad news, and he embraces it — which is commendable,” he said. “You can’t be allergic to bad news if you want positive change.”

Even if government facilities' ratings end up outperforming expectations, such a system needs to be continually tweaked and updated, said Joe Plenzler, director of media relations for the American Legion's National Headquarters. For example, “What consequence comes from being at the 'bottom' of a list in a case where all of the facilities score 100 percent, and the bottom hospital scores a 99.9 percent?” he said. “We will always support increased transparency ranking VA facilities, but we would just need to be cautions when it comes to how they are scored.”

The ratings site is “up and running,” almost ready for public consumption, Chenelly said. “They’re testing and focus-grouping.”

“Why is this guy in his position?”

Leaders at key VSOs have also been getting used to new administration faces at VA. After the Washington Post reported that Trump appointees have been planted in every agency to keep tabs on career staff for the White House, some veterans advocates expressed concerns about one new face in particular: VA Senior White House Advisor Thomas “Jake” Leinenkugel, who came out of retirement to take the job after a quarter century running his family’s beer-brewing business in Wisconsin.

Despite the fact that he’s a Marine veteran, Leinenkugel — who did not respond to Task & Purpose’s requests for an interview — has no apparent direct experience in government or veterans affairs.

Leinenkugel has been a fixture in the White House meetings with veterans groups since the new administration took office, including a breakfast session with Shulkin on March 22 and the veterans’ only major meeting so far with President Trump, a listening session in the Roosevelt Room on March 17.

We had a great meeting today with Veterans service organizations at the @WhiteHouse with @POTUS. pic.twitter.com/JePw6nXd6S

“We were a little surprised” to see Leinenkugel working the room with other VA and White House staff, one vet advocate, who was at Shulkin’s March 22 breakfast meeting, said. “I worked on veterans affairs in Wisconsin,” the advocate said. “In 20 years, I’ve never once heard mentions of ‘Jake Leinenkugel’ and ‘veterans’ in the same sentence.”

That’s led to concerns that the businessman — and several other Trump appointees from right-leaning groups — could be part of a quiet union-busting, privatizing push at VA by the White House. “Has this guy set foot in a VA hospital? Does he know how to file a disability claim?” one vets advocate told Task & Purpose. “Why is this guy in his position? Who’s he know, who’s he beholden to?”

VSO leaders who have spoken to Leinenkugel, however, say he’s affable, a good listener, and upfront about his blind spots.

“He’s a successful businessman in the private sector, and we look forward to ideas. He’s coming in not really knowing much more than what’s in the newspapers, so he’s got a learning curve,” one advocate said, adding that educating new political appointees was nothing new for veterans groups: “We see this every few years.”

Still, Leinenkugel — who’s been trekking out to VA centers across the country on a listening tour — may have gotten ahead of the administration in some of his conversations with advocates. At Shulkin’s breakfast session, one advocate said, Leinenkugel “talked about VA hospitals closing and consolidating, which of course makes sense, but it’s not something the administration has talked about,” because it’s such a politically fraught topic.

“You have to assume Jake has the president’s ear and Secretary Shulkin’s ear,” the advocate said. “That’s why I was sort of surprised at this conversation.”

In some ways, veterans advocates’ jittery discussions of new faces and programs at VA reflect broader concerns about a new, unpredictable, and radically unconventional presidential administration.

VSO representatives, for example, have a lot of questions about the White House’s new Office of American Innovation, which is run by President Trump’s businessman son-in-law, Jared Kushner, and is expected to play a major role in reforming the VA.

“Reform is happening … we want to make sure it happens in as responsible a way as possible.”

“[T]he government should be run like a great American company,” Kushner told the Washington Post last week. “[O]ur hope is that we can achieve successes and efficiencies for our customers, who are the citizens.”

If Kushner’s office is going to work with vets, that’s news to some. “I read about it in the Post,” one veterans advocate told T&P;, laughing. “Nobody called us up and said they were going to do it. That was a little surprising.”

But that may just be par for the course for an administration still learning its way with stakeholders and interest groups that have been longtime fixtures in the Beltway. “We’re hoping someone from the VSO community is going to be a part of [Kushner’s efforts],” the advocate said.

VA’s work with the Office of American Innovation is beginning in earnest. Shulkin told Task & Purpose in a statement that the office is “providing technical capabilities from the best talent in Government and private sector as we work to modernize and improve the quality of services for Veterans.”

Advocates tell Task & Purpose they’re bullish on those efforts, and on private-sector help — as long as it doesn’t disrupt VA’s fundamental obligations to vets.

“Our guiding principles are outlined in resolutions that support making sure that veterans lose no benefits, and that the government 'do no harm' when it comes to veterans,” the American Legion's Plenzler said.

“We’re very guarded about maintaining a very strong VA system,” DAV’s Augustine said, recounting the ways that system helped him after being injured in Vietnam and discharged from the service. “They take care of the whole veteran. We feel very strongly about it.”

“We’ve been assured by just about everybody we’ve spoken to that wholesale privatization is off the table — everyone pretty much agrees on that,” Gillums of Paralyzed Veterans of America said. “My sense is this is a results-based administration.”

He added, “I think it’s important to separate all the other issues in this administration from veterans’ issues.”