Citing a potential $25 million in savings — less than .03% of his department’s annual budget — VA Secretary David... 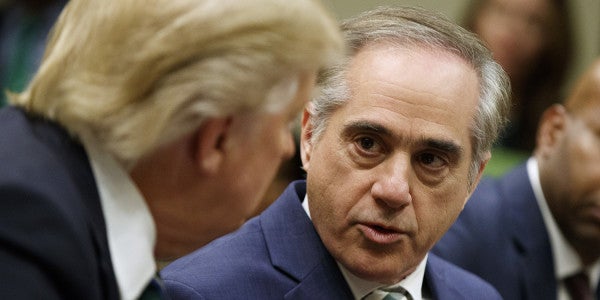 Citing a potential $25 million in savings — less than .03% of his department’s annual budget — VA Secretary David Shulkin told Congress Wednesday he was considering shuttering more than 1,100 department facilities across the country, seen as a first step in expanding private medical options for patients in the VA system.

This revelation came May 3 in Shulkin’s testimony to the House Appropriations Subcommittee on Military Construction, Veterans Affairs and Related Agencies, according to the Associated Press:

Shulkin said the VA had identified more than 430 vacant buildings and 735 that he described as underutilized, costing the federal government $25 million a year. He said the VA would work with Congress in prioritizing buildings for closure and was considering whether to follow a process the Pentagon had used in recent decades to decide which of its underused military bases to shutter, known as Base Realignment and Closure, or BRAC.

“Whether BRAC is a model that we should take a look, we're beginning that discussion with members of Congress,” Shulkin told a House appropriations subcommittee. “We want to stop supporting our use of maintenance of buildings we don't need, and we want to reinvest that in buildings we know have capital needs.”

The White House has proposed raising VA’s discretionary budget by 6% next year to $78.9 billion, making it one of only a few cabinet departments that wouldn’t face daunting cuts.

But Shulkin and the Trump administration have both signaled a willingness to find greater efficiencies in veterans health care, including shutting down programs and broadening private-sector partnerships.

A BRAC-style process to close down VA buildings would be nothing new. In 2000, at the request of the General Accounting Office, the department rolled out CARES, the Capital Asset Realignment for Enhanced Services initiative, to review and shutter unused facilities, particularly as vets in the VA care system underwent fewer inpatient procedures in government buildings.

Over more than a decade, CARES reduced the VA’s square footage and property outlays significantly, although the program was occasionally forced to backtrack on controversial recommendations — notably, when it sought to shut down a long-running VA medical center in Waco, Texas.

But there was another major problem with CARES: It actually ended up costing the VA a lot of money.

“According to VA officials, rather than show that VA should downsize its capital asset portfolio, the CARES process revealed service gaps and needed infrastructure improvements,” a 2009 GAO report found.

Shulkin, whose reform-minded moves to bring innovation and greater hiring accountability to VA have won him early plaudits from veteran advocates, didn’t go into detail on how VA facility closures might work. But his invocation of BRAC — a painful, often contentious process that’s shuttered military bases and impacted their communities heavily over the years — didn’t sit well with some members of Congress, according to the AP.

“Don't ever use the term BRAC because it brings up a lot of bad memories,” Republican Rep. Jeff Fortenberry of Nebraska — a state long targeted for BRAC closures — warned Shulkin. “You automatically set yourself up for a lot of controversy.”