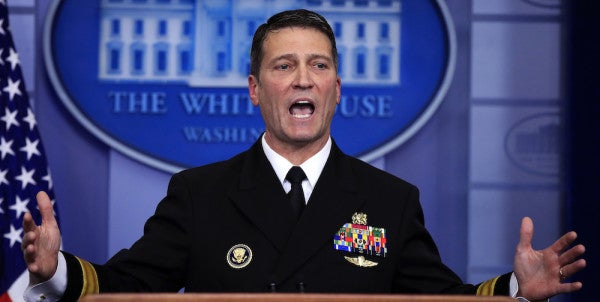 I am pleased to announce that I intend to nominate highly respected Admiral Ronny L. Jackson, MD, as the new Secretary of Veterans Affairs….

Trump does not plan on keeping Shulkin around in the interim, apparently. The president tweeted that Robert Wilkie, the Pentagon's current undersecretary of personnel and readiness, as the interim VA secretary.

Wilkie has personally experienced the importance of making sure that wounded warriors get the health care they need. His father was severely wounded during the invasion of Cambodia in 1970.

“He came back to the States after a year in a Navy hospital in Hawaii – about half of his weight,” Wilkie told Task & Purpose in February. “There were people like [Army Gen.] Creighton Abrams, who made a decision that his service was too valuable, and they overrode the medical board. My father later went on to command units in the 82nd Airborne Division.”

….In the interim, Hon. Robert Wilkie of DOD will serve as Acting Secretary. I am thankful for Dr. David Shulkin’s service to our country and to our GREAT VETERANS!

While Rear Adm. Jackson has been practicing medicine since 1996, it's worth noting that he lacks substantial policy experience compared to Shulkin, who was nominated by President Barack Obama for a leadership position within the VA in 2015. Indeed, the public first met Jackson in January when he delivered an enthusiastic update on the commander-in-chief's physical.

Jackson joined the U.S. Navy after graduating from Texas A&M; University's medical school in 1995. He's qualified in submarine and hyperbaric medicine, and later in his career deployed as an emergency medicine physician to a surgical shock trauma unit in Taqaddum, Iraq, according to his official bio. While deployed, in 2006, he was selected to be a White House physician. He's since led the Executive Health Care for the President's Cabinet and Senior Staff, and was the appointed physician for President Barack Obama.

The troubles for Shulkin, a holdover from the Obama Administration who served as undersecretary of health at the VA under its last chief, Robert McDonald, began mid-February when an inspector general report alleged Shulkin and his top staff committed “serious derelictions” in expensing during a 10-day trip to Europe last year.

The Feb. 14 report found that Shulkin billed the VA for the cost of his wife’s airfare and improperly accepted Wimbledon tennis match tickets, and claimed that he misled ethics committees and the media. Though Shulkin has since repaid the cost of travel expenses, the incident has followed him.

Immediately after the report, stories emerged in the media of a VA at war with itself — civil servants appeared to be under siege by pro-privatization forces operating within the department, who allegedly sought to oust Shulkin and his top staff to pave the way for a those more amenable to their goals. The Veterans Health Administration, the VA’s medical arm, oversees the largest integrated healthcare system in the country, and there are concerns among veterans’ advocates and lawmakers that it’s a ripe target for those interested in parceling it off for profit.

Does It Actually Matter Who Runs The VA? Yes. Here’s Why

For the past month, rumors of deliberate leaks meant to weaken the embattled chief and internal power struggles between department staffers and political appointees have continued unabated — and have kept the travel scandal in the eyes of the mainstream media, and the White House.

However, Shulkin hasn’t been without his supporters, before and since the scandal broke. He received unanimous approval from Congress when he was approved for the post in 2017 — almost a year to the day the inspector general report was released — and in the wake of the travel scandal, received staunch support from largest veterans service organizations for his work as the department’s head.

Even that wasn’t enough to save his job.