The Knives Are Out For VA Secretary Shulkin

It’s been a tumultuous week for the Department of Veterans Affairs, after a scathing inspector general report surfaced detailing abuses... 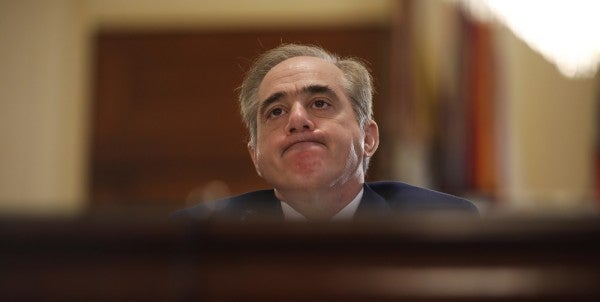 It’s been a tumultuous week for the Department of Veterans Affairs, after a scathing inspector general report surfaced detailing abuses and errors in VA Secretary David Shulkin’s 10-day trip to Europe last summer. But the fall-out from the investigation hints at a power struggle over the department and its priorities.

The VA Office of the Inspector General report released on Feb. 14 detailed “a number of serious derelictions” in expensing a $122,000 trip Shulkin, his wife, and a small group of VA employees took to Copenhagen and London last July. Among its more serious claims: that Shulkin’s now-retiring chief of staff, Vivieca Wright Simpson, doctored emails in order to bill the VA for the secretary’s wife’s airfare.

Shulkin has since pledged to repay the cost of his wife’s travel expenses and a pair of Wimbledon tickets the OIG report said he improperly accepted. But while Simpson resigned her post after 35 years at the VA on Feb. 16, Shulkin pushed back against the allegations that his chief of staff doctored emails, telling reporters that he believed her email account may have been hacked. (Rep. Tim Walz, the ranking Democrat on the House Veteran Affairs Committee, called on the Department of Justice to investigate that claim.)

For Shulkin, an Obama-era VA officer unanimously confirmed by senators for the department’s highest office last year, the scandal means that his quiet, bipartisan brand in the chaotic Trump administration has officially come to an end. In the aftermath of the report, Shulkin has not only lost his chief of staff but had at least one Republican congressman call for his resignation; Shulkin went into President’s Day weekend under a cloud of speculation that he may be asked to resign.

So why the hurry to rush Shulkin out the door? Shulkin himself suggested to the press that the leak of last year’s trip to Europe was a politically motivated attack from parties trying to push their own agenda from within the VA, and he vowed to “root” out the bad actors.

“We need this department to be functioning well,” Shulkin told Military Times following the Feb. 15 House Veteran Affairs Committee hearing on the 2019 budget. “Everybody needs to know their job is taking care of veterans … If that’s not the case, we’re going to root that out and we’re going to make sure this is a department we’re all proud of.”

Stories of political infighting within the VA — which oversees the largest health care system in the country — have bubbled to the surface in the aftermath of the OIG report. Recent articles by The Washington Post, New York Times, and Military Times depict a power struggle between VA civil servants and a cohort of well-connected proponents of VA privatization operating within the department.

The significant influence of Concerned Veterans for America, a conservative group affiliated with the Koch brothers — and a supporter of Coffman, the congressman who’s now demanding Shulkin’s scalp — has raised concern among veterans service organizations, given CVA’s advocacy for moving more veterans’ care out of the VA and into the private sector, according to Stars and Stripes.

Shulkin, along with numerous veterans service organizations and lawmakers, has argued against privatizing the VA, but the fallout from the OIG travel report may have provided proponents of privatization an opening. Indeed, White House senior adviser on veterans affairs Jake Leinenkugel, a former Marine and political appointee with no prior experience in veterans care, circulated an internal memo in December that expressed frustration with Shulkin and his top leadership and suggested capitalizing on the travel scandal as a way to replace Shulkin with a strong political candidate. That email was recently obtained and published by The Washington Post.

“This behavior is disturbing, represents the worst of Washington politics, and must be brought to a swift and decisive end,” Walz said of the alleged political jockeying in a Feb. 16 statement.

As Shulkin continues to face criticism for the excesses detailed in the OIG report, several veterans service organizations have rallied to his defense and pushed back against calls for the VA chief to resign.

“While we were disappointed to learn of the recent issue with the Secretary’s travel, we believe that the current controversy surrounding the Secretary is part of a larger effort to remove him and install others who would take steps to privatize the services provided to our nation’s heroes by the Department of Veterans Affairs,” Denise Rohan, the national commander for the American Legion, said in a Feb. 19 statement.

Joe Chenelly, the executive director of AmVets, put it more succinctly in a Feb. 19 statement directed at President Trump: “Please allow VA Secretary Shulkin the space necessary to do his job and continue your focus on fixing the VA.”