Veterans Affairs Secretary David Shulkin and his senior staff committed “a number of serious derelictions” in expensing a 10-day, $122,000... 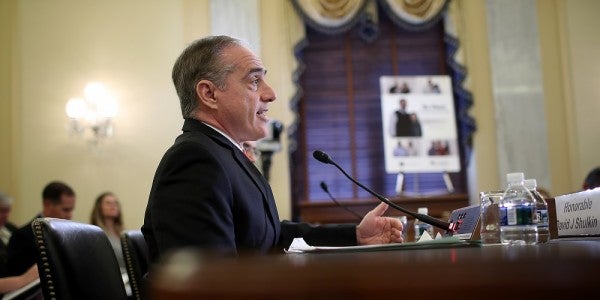 Veterans Affairs Secretary David Shulkin and his senior staff committed “a number of serious derelictions” in expensing a 10-day, $122,000 trip to Europe with his wife, Merle Bari, last July, improperly accepting tickets to Wimbledon, and filing incomplete or misleading paperwork on the entire incident, according to a blistering VA inspector general report published today.

The report’s findings — including suggestions that Shulkin’s chief of staff, and some of the VA secretary’s own statements, misled investigators and the American public — threaten to derail the bumpy tenure of a career medical administrator who in the past year has burnished a reputation as one of the Trump cabinet’s most professionally qualified, least troublesome members.

VA investigators have asked the department’s counsel to review whether administrative punishment is appropriate for Shulkin’s chief of staff, and also suggested that the secretary reimburse the department for his wife’s travel expenses and the improperly accepted favors. Through his private lawyers, Shulkin has rejected the report’s findings. “VA OIG reports ‘must be accurate,’ ‘must be fair,’ and ‘must be objective,’” Shulkin’s attorneys wrote in a 16-page rebuttal. “This report is none of those things.”

Acting on an anonymous tip, the OIG last summer launched a full inquest into the the July 2017 trip to Copenhagen and London, which involved “two travel days… three-and-a-half days of meetings, an official evening reception, and five-and-a-half days of personal time,” according to the report.

What inspectors found — and detailed in their 97-page report, embedded below — was a host of emails, text messages, and sworn or public statements that suggested the trip was a junket, was siphoning VA staff and resources, and was lightly documented to avoid scrutiny. Much of the trip was spent seeing the sights, including Westminster Abbey, Denmark’s Rosenborg Castle, a world-class tennis match, shops in Sweden, the Thames River by boat.

Here are the five major findings of the VA Office of Inspector General report:

The VA chief of staff falsified paperwork (and fabricated an award) to expense Shulkin’s wife’s travel.

Prior to the trip, Vivieca Wright Simpson, Shulkin’s chief of staff and the third highest-ranking VA official, “made false statements and altered a document” to create a pretext for taxpayers to cover the cost of airfare for the secretary’s wife.

According to the report, Simpson altered the language of an email from an aide coordinating the trip to make it look like Shulkin was receiving an award from the Danish government. That “award” was then used to justify paying for Bari’s travel — $4,300 in airfare so the secretary and his wife could sight-see, under the pretense of getting an award that didn’t exist.

When interviewed by investigators, Simpson said she didn’t recall whether she altered the email, insisting only that “I responded appropriately to the email.” According to the report, that misrepresentation was forwarded to the Department of Justice, which declined to pursue criminal prosecution.

Shulkin accepted Wimbledon tickets from a “friend” of his wife’s who couldn’t recall his wife’s name.

Shulkin and Bari also attended the ladies’ final tennis match at Wimbledon on July 15, 2017, during their trip. According to the report, Shulkin told investigators that the tickets were a gift from Victoria Gosling, who Shulkin described as a friend of his wife. (“We went with friends. There was no business connection to that,” he told the Washington Post in an interview last November.)

VA’s inspectors found some evidence to contradict that the Shulkin and Bari were close to Gosling, who served as the CEO of the 2016 Invictus Games in Orlando, Florida, in addition to running a for-profit enterprise and directing several philanthropic institutions.

When investigators reached Gosling by email — after 19 failed attempts to get her on the phone — she described Shulkin and his wife as “friends of mine,” and said the tickets were a thank you for their “personal support to me whilst I was CEO Invictus Games Orlando.”

But in a later interview with investigators, Gosling was unable to recall Bari’s first name, referring to her instead as Shulkin’s “wife,” before finally telling investigators at the end of the call that “I think that kept throwing me. I’m actually having a genuine blank here.”

Under federal ethics rules, the solicitation or acceptance of any gift given due to an employee’s official position is strictly barred. For the tickets to qualify as an approved gift, and not one between a coordinator of a series of veterans’ businesses and charities, looking to curry favor with the VA’s top official — there needs to be a personal friendship.

Investigators found Gosling’s poor memory to be evidence that her “friendship” with the Shulkin’s wasn’t a close one at all.

A high-level VA staffer was tasked with “concierge” duties for Shulkin and his wife.

It may sound like a small errand, but it clearly was not, according to the report:

Personal activities planned for the Denmark trip included touring Amalienborg Palace for the Changing of the Guard; visiting Christiansborg Palace, Rosenborg Castle, and Frederiksborg Castle; taking a boat tour of Copenhagen from Nyhavn Canal; and shopping in Copenhagen. There was also an unplanned excursion across the border to Malmo, Sweden, for dinner on their last day, July 14. For the London trip, planned tourist activities included excursions to the Churchill War Rooms, Buckingham Palace, Kensington Palace, and Westminster Abbey; a Thames River cruise; and visits to St. Paul’s Cathedral, Tower of London (including the Ceremony of the Keys), Tower Bridge, Shakespeare’s Globe, London Eye, and Windsor Castle.

Traveling VA employees are required to fill out a “Travel Cost Comparison Worksheet, which compares the actual cost of the trip with the cost of the trip excluding personal travel expenses,” the report states, adding: “No such worksheet was completed for this trip.”

The VA’s documentation of the trip, and it’s costs, were inadequate, and an analysis of the costs revealed discrepancies and potential errors that “warrant a closer examination by VA auditors.”

Though investigators determined the trip cost at least $122,334, a lack of accurate documentation means the full cost is unclear. Inspectors’ analysis of the costs revealed discrepancies and potential errors that they said “warrant a closer examination by VA auditors.”

Shulkin and top staff changed their stories when responding to media queries about the trip.

Last September, after learning that the Washington Post planned a story on questions surrounding the Europe trip, Shulkin huddled with a top press advisor in the department to craft a single-sentence statement: “All activities including Wimbledon were reviewed and approved by ethics counsel.” That was incorrect, however, and the advisor “took no subsequent actions to correct it, even after VA ethics officials informed him that they did not believe it was an accurate statement because ethics officials had not reviewed ‘all’ activities,” the report notes.

Shulkin did himself no favors in a followup interview with the Post in November. “As part of that interview, Secretary Shulkin claimed that he paid for the Wimbledon tickets and that they were not a gift from ‘folks from the Invictus Games or anything like that,’” the report states.

“That statement also is not accurate,” the report concludes.

CORRECTION: An earlier version of this story misstated the duration of Veteran Affairs Secretary David Shulkin's July 2017 trip to Europe. (2/19/2018; 11:43 am)