Veterans Affairs Secretary David Shulkin may be the only man in Washington who doesn’t spend all of his time cavorting... 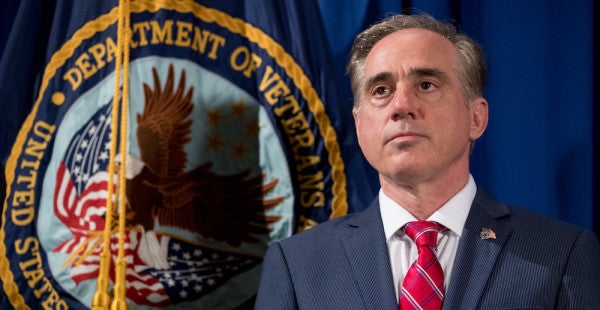 Veterans Affairs Secretary David Shulkin may be the only man in Washington who doesn’t spend all of his time cavorting with lobbyists or political stooges. At least, that’s the ground truth according to a glowing profile of Shulkin published by the New York Times on Tuesday.

The account doesn’t open with the VA secretary bogged down in meetings or rubbing elbows with career pols on Capitol Hill — although he certainly been busy pushing reforms through the beleaguered agency — but, rather, with Shulkin seeing patients.

That’s right — he sits in President Donald Trump’s cabinet, and he spends his days making house calls, sometimes in person, and sometimes via videolink:

A gray-haired Vietnam veteran sat rustling on the paper of an examining table at the small veterans clinic in Grants Pass, Ore., on a recent afternoon when his doctor for the day appeared on a screen in front of him, wearing a white lab coat and bulbous headphones.

“Take some deep breaths. All the way in … And, sir, do you want to give me a good cough?” the doctor said as he listened to the veteran’s heart and lungs from about 2,400 miles away in his office overlooking the White House.

The doctor was David Shulkin, the new secretary of veterans affairs, and this was not some publicity stunt. Dr. Shulkin believes it is impossible to right the stumbling bureaucracy used by nine million veterans without understanding the experience of patients in the examining room. So Dr. Shulkin, the leader of the country’s second-largest federal agency, has been seeing patients regularly, both in person and remotely, since he was named the Department of Veterans Affairs’ under secretary of health in mid-2015 to help turn it around after the scandal over a cover-up of appointment delays.

“Sometimes leaders get disconnected from their organizations,” Dr. Shulkin said after he finished the exam. The risk is especially great, he said, because the department has more than 350,000 employees and 1,700 facilities. “There is no better way to understand it than to use it and actually see.”

Sure, the scene of government-bureaucrat-as-medical-yeoman is a little convenient for a Times profile, but Shulkin isn’t the only VA official to embrace face-to-face home time with vets. Since the VA began offering regular physician visits through its Home-Base Primary Care (HBPC) program in 1972, the program has seen a dramatic decline in overall costs for patients, and reported the highest patient satisfaction rate, compared with other services offered by the agency.

A 2014 VA study estimated that its HBPC for Medicare beneficiaries could save close to $4.8 billion a year.

Nationwide, the doctor’s house call has been on the decline for decades. The Times has reported that between 1930 and 1980, house calls went from making up 40% of all American physician appointments to 1%. In the intervening decades, the VA pioneered in-home physician visits for those with chronic or multiple ailments that make clinic appointments unpractical, even experimenting with “electronic house calls” like Shulkin’s as early as 2002.

Now, the practice is on the rise, and the Affordable Care Act has funded projects to assess future efforts to increase house calls for both veterans and civilians.

But based on the Times profile, Shulkin — the son of an Army psychiatrist, and the first civilian appointed to head the VA — has the right approach to house calls. They’re not just about cost-saving, but the doctor-patient relationship — a human reminder of the fundamental mission of the medical profession in general, and the VA in particular: to make people’s lives better.

And it’s worked throughout Shulkin’s career, according to the Times: “At each stop [Shulkin] tried to stay out of the executive suite and in the examining rooms. When he noticed that the quality of care at Beth Israel was distinctly worse after the sun went down, he began walking the wards after midnight to better understand the challenges of the after-hours staff.”

If this works so well for Shulkin, maybe it’s time to send more VA physicians out into the field. After all, where’s the harm in trying?