As Trump Prepares To Sign VA Order, Many Are Cautiously Optimistic About Its Impact

President Donald Trump is scheduled to sign an executive order Thursday afternoon increasing accountability for inept and corrupt employees at... 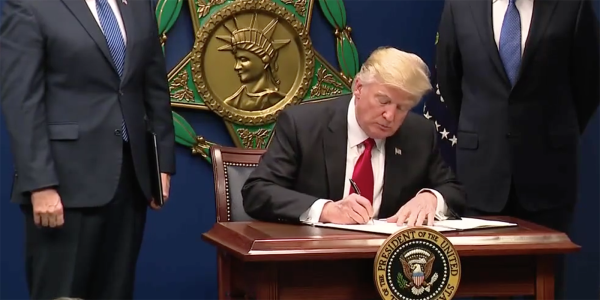 President Donald Trump is scheduled to sign an executive order Thursday afternoon increasing accountability for inept and corrupt employees at the Department of Veterans Affairs, and veterans advocates are pleased with the plan — even if no one’s completely sure what the plan is yet.

Many veterans service organizations and advocates have already voiced support for the executive order, which is expected to create a new Office of Accountability and Whistleblowing Protection in VA. The office “will investigate allegations of misconduct – including retaliation against whistle-blowing employees who reported abuses — and seek to identify systemic barriers that have previously hindered the agencies’ top leaders from more adequately addressing such problems in the past, including with disciplinary action,” USA Today reported after VA Secretary David Shulkin address reporters on April 26.

But in conversations with high-level VSO representatives and D.C. insiders this week, Task & Purpose could find none who had seen a draft of the executive order or knew how it would work. Most said they only knew what little had been written in the papers about the order. (VA officials referred T&P; to the White House for comment; calls to the White House went unanswered.)

Sources with knowledge of VA’s inner workings said that the order sounds duplicative of the Office of Accountability Review, a legal group created by acting VA Secretary Sloan Gibson in 2014 at the height of a public outcry to investigate “improprieties related to patient scheduling and access to care, whistleblower retaliation, and related matters that impact public trust in VA.” (Representatives for the Office of Accountability Review and the VA’s Office of General Council, which oversees OAR, did not respond to T&P;’s requests for comment.)

But Shulkin told USA Today that he alone would oversee the new accountability office, and it would focus on the entire VA workforce, not just senior officers — the main subject of OAR’s work.

The executive order, Shulkin said, would help guarantee “that we have employees who work and are committed to the mission of serving our veterans, and when we find employees that have deviated from these values, we want to make sure that we can move them outside of VA and not have them working at VA.”

There’s been a broad, bipartisan push for employment-conduct reforms at VA for years, as stories of veteran-care backlogs, patient neglect, and personal greed have graced news headlines and politicians’ stump speeches. Democratic Rep. Ann Kirkpatrick of Arizona, a member of the House Committee on Veterans’ Affairs, introduced legislation in 2015 to create an “Office of Whistleblower and Patient Protection” in VA, similar to the Trump executive order’s plan. Republican Sen. Johnny Isakson of Georgia sponsored a similar bill last year that racked up 45 bipartisan cosponsors. (Neither bill never got a floor vote.)

Shulkin, who served in the Obama-era VA before being named department secretary by Trump, has been particularly bullish on increasing agency firing authority over VA employees, many of whom are unionized. When a Houston VA medical center employee was caught watching porn at work last month, and his bosses couldn’t fire him for 30 days under civil service rules, the department took the extraordinary step of using the employee’s case as ammunition for policy changes in a press release. “This is an example of why we need accountability legislation as soon as possible,” Shulkin said in the release. “It’s unacceptable that VA has to wait 30 days to act on a proposed removal.”

Virtually no one in the major VSOs disagrees with that statement. While most are careful to stress that the vast majority of VA workers are conscientious and eager to serve vets, they have long fought for accountability measures to swiftly fix what’s broken in veteran care.

Exclusive: Congress Is Quietly Trying To Pass A ‘GI Bill 3.0’ By Memorial Day »

“We want VA Secretary Dr. David Shulkin to have the authority to manage his people in a manner expected of all senior executives, public or private,” VFW Executive Director Brian Duffy wrote in an op-ed for T&P; on April 26. “We want the secretary to weed out the non-performers and especially the criminals, regardless of whether the crime was committed on or off-duty.”

The VFW and several of its peer organizations, as well as the VA and allies of the president, have also come out in favor of the VA Accountability First Act — legislation sponsored by House Veterans Affairs Committee Chairman and Republican Rep. Phil Roe of Tennessee, which would ease “the removal or demotion of employees of the Department of Veterans Affairs based on performance or misconduct.”

Compared to that legislation, today’s executive order may simply be mood music. But it’s a tune many in Washington are dancing to.

“While a new Office of Accountability will be a positive step toward fixing the toxic VA culture, it won’t be enough,” Mark Lucas, executive director of the Koch Brothers-backed advocacy group Concerned Veterans For America, told T&P; in a statement. “Shulkin’s hands will be tied until Congress passes strong accountability legislation, like the VA Accountability First Act, to let him get these bad VA employees out quickly.”

Nevertheless, some advocates’ optimism about today’s signing is tempered by caution. “We support efforts to increase accountability for bad employees at VA,” one political staffer told T&P;, “as long as the mechanisms continue to protect good ones.”