In a mystery-shrouded press conference at the Department of Veterans Affairs this morning, VA Secretary Dr. David Shulkin announced that... 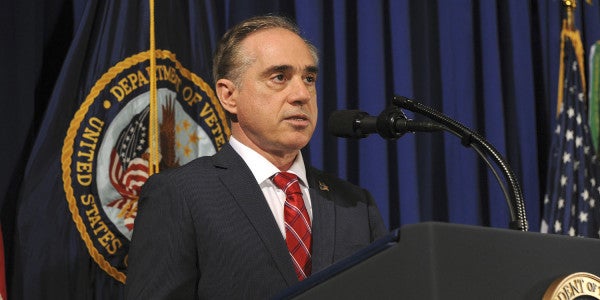 In a mystery-shrouded press conference at the Department of Veterans Affairs this morning, VA Secretary Dr. David Shulkin announced that the department would move quickly to adopt the same electronic health-records system that the Department of Defense uses — a move once mulled by the Obama administration that veterans advocates are praising today.

“The president made clear that we’re going to do things differently for our veterans, to include in the area of EHR,” Shulkin said, adding that the department’s current VistA e-records system “is in need of major modernization… and software development is not a core competency of VA.”

The announcement was long on ambitions and short on details — such as how long it will take to implement the switch and how much it might cost — but IT improvements have been a major priority for Shulkin, a doctor who ran the Veterans Health Administration before President Donald Trump tapped him to run VA in January.

“This can certainly have an impact on scheduling as well,” Shulkin said of the move. It’s hoped that putting vets on a single records system could streamline their entire care process for a lifetime. The secretary added that VA would also make “significant cybersecurity enhancements” as part of the upgrade.

“No more complications. The records will now be able to follow the veteran when they leave service, meaning faster, better, and far better quality care,” Trump said on Monday in a separate press conference.

Trump called the announcement “one of the biggest wins for our veterans in decades.”

There is some fine print to the plan, though: First, the DoD’s health records system is based on a commercial platform, developed by Kansas City, Missouri-based Cerner Corporation — and in order to enter into a contract with Cerner for VA records, Shulkin had to sign a special waiver to skip a competitive-bidding process. Second, VA has unique needs for recordkeeping that DoD doesn’t, so the department will be asking Cerner for “additional capabilities to maximize interoperability,” Shulkin said.

The VA secretary, who has cultivated a close working relationship with Trump, got a surprise plug for his press conference from the president’s Twitter account, and from Joe Chenelly, national executive director of AMVETS, one of the U.S.’s most powerful veterans service organizations:

Today is going to be a big day for our Veterans, thanks to @SecShulkin. Stay tuned!

Will be at the press conference at 11 this morning. Just wrapped up meeting w/ @SecShulkin. https://t.co/Y9ywlttuH1

The response to the announcement has been largely positive among veterans advocates and reporters who cover VA:

VA to adopt same electronic medical record as DOD. Big deal, should make for easier transitions. Congress has pled for this for years.

The timing of Shulkin’s announcement may have been a surprise, but the substance was not. Early on in his first term in 2009, then-president Barack Obama proposed a similar EHR-sharing plan between VA and DoD. “When a member of the armed forces separates from the military, he or she will no longer have to walk paperwork from a [Defense Department] duty station to a local VA health center,” Obama explained. “Their electronic records will transition along with them and remain with them forever.” That plan never came to fruition. There were indications in February, though, that VA would move forward with an off-the-shelf commercial EHR solution.

Some critics, however, say that scrapping VistA represents a massive bureaucratic failure, after VA spent billions — and its IT experts spent 40 years — building the novel, in-house records system.

“The whole story of how VistA was born, grew and slid into disrepair illustrates just how difficult it can be for the government to handle innovation in its midst,” Politico’s Arthur Allen wrote in March.