Congressman Brian Mast has drawn the Department of Veterans Affairs into yet another scandal. This week, the Republican and wounded... 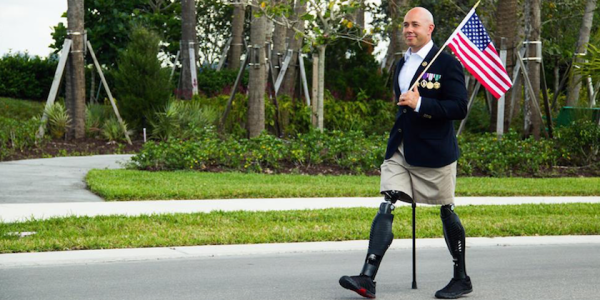 Congressman Brian Mast has drawn the Department of Veterans Affairs into yet another scandal. This week, the Republican and wounded Army veteran accused the Florida VA medical center where he receives treatment for his injuries of keeping portraits of President Donald Trump and Secretary of Veterans Affairs David Shulkin off its walls for political reasons.

“There is absolutely a political end to this,” Mast, who lost his legs to an IED in Afghanistan in 2010, said on Fox & Friends. “You can look at VAs across the country. There are VA unions that campaigned heavily against President Trump. The VA union in my own VA hospital that we’re talking about right now — you can go on their Facebook page, see the things they put up against President Trump.”

Mast’s allegations appear unsubstantiated. Task & Purpose could not find the Facebook posts Mast was referring to, and Mast’s office did not reply to a request to provide proof that they exist. Randal Noller, a VA public affairs officer, said that his team was also unable to locate the Facebook posts in question.

“There may be comments on posts,” he wrote in an email to Task & Purpose, “but those aren’t removed unless they violated VA’s social media policy.”

Strangely, the publicity stunt paid off. Thanks to Mast’s efforts, the Department of Veterans Affairs has now ordered all of its facilities to download portraits of Trump and Shulkin from the White House website, print them, frame them, and put them on display as placeholders until the official portraits are released by the U.S. Government Publishing Office at an unspecified date, according to guidance released on March 16.

The “scandal” began on March 14, when Mast joined Beau Brumfield, the co-owner of military apparel company Gruntworks, and several other veterans in the lobby of the West Palm Beach VA Medical Center. The group filmed themselves hanging portraits of Trump and Shulkin on the wall with some assistance from members of the West Palm Beach VA staff. The portraits had been downloaded and printed from the White House and VA websites.

“[I’m] proud of the fact that the local vet community got it done,” Brumfield told a local CBS affiliate. “We walked in there, we made it happen. It was non-confrontational. It was nonpolitical. We just wanted to see it happen.”

It was a fleeting victory, however. Soon after Mast and his crew left the medical center, VA staff took the portraits down. Outrage ensued. Two days later, Mast appeared on Fox & Friends, where he explained his motivations for hanging the portraits to a trio of sympathetic anchors.

Unofficial photos of President Trump and Secretary ShulkinImage via Twitter

“My office started receiving numerous reports from veterans, who had gone to the VA and just in passing were asking about where are the portraits of the president, of the secretary of the VA,” Mast told Fox & Friends. “They were told a gamut of different things — mostly negative, from, ‘well, maybe we’ll get them up in eight or nine months, to people saying, ‘he’s not my president,’ to things that were much more vulgar than that.”

There is, however, another, less conspiratorial explanation, which Mast neglected to mention: The White House hasn’t released the official portraits yet. The Government Publishing Office, which is responsible for reproducing photocopies of the president and the vice president for official use in federal facilities, confirmed to Task & Purpose that it is still “standing by” for the official photo files.

Mast’s office would not confirm or deny whether the first-term lawmaker knew this before he marched into the West Palm Beach VA Medical Center with the unofficial portraits two days ago — but one could assume that, had the congressman really wanted to know why the portraits of Trump and Shulkin were not on the wall of his local VA hospital he would’ve simply made a phone call and found out.

Instead, Mast went with the more politically sexy option: attempting to drive an even deeper wedge between veterans and the VA, whose employees are only authorized to display official photos of government officials on facility walls, according to Noller.

“Every veteran left there thinking that they had done a good thing, that they had a small win, that they worked together with the VA,” Mast said on Fox & Friends. “And they ended up coming away that night feeling as though they were stabbed in the back by those people at the VA, because they went behind their back and took the pictures down after something good had happened.”

The VA’s decision to order all of its facilities to adorn their walls with temporary portraits of Trump and Shulkin marks a major victory for Mast, whose congressional career began in November 2016.