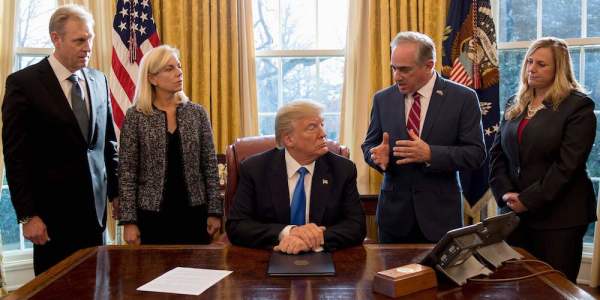 The Jan. 9 executive order, “Supporting Our Veterans During Their Transition from Uniformed Service to Civilian Life,” focuses on soon-to-be former service members, who statistically have the highest risk for suicide among all vets.

The new mandate was briefed to reporters Tuesday morning by senior administration officials, including Secretary of Veterans Affairs David Shulkin, before President Trump signed the order in the afternoon. While still in the planning stages, here’s what we know so far.

All recent vets get a year of mental health screening starting in two months.

“We will be covering all separating military members who are transitioning into civilian life — 100% of them — with the mental health benefit for 12 months,” Shulkin told reporters in the Oval Office on Tuesday at the order’s signing ceremony. (Some vets, however, are excepted from the policy; more on that below.) Beginning March 9, transitioning veterans become eligible to receive one year of mental health care through the Veterans Health Administration — the VA’s medical arm.

Care may be provided at VA or by a private facility, depending on wait times where you live.

The order also opens the door for these veterans to participate in the VA’s CHOICE program — which provides access to private sector care providers and specialists.

The idea is to give seamless care to transitioning service members even if they don’t have a job or a health plan.

“As service members transition to Veteran status, they face higher risk of suicide and mental health difficulties,” Shulkin said in a statement. “During this critical phase, many transitioning service members may not qualify for enrollment in health care. The focus of this Executive Order is to coordinate federal assets to close that gap.”

A lot of vets who don’t qualify for long-term VA care will still qualify for this program.

The order opens the doors to VA mental health care for the 60% of transitioning veterans who are currently ineligible for long-term VA medical benefits — usually because they lack a verified service-connected disability or service in a combat zone.

If you have bad paper, you don’t qualify for this program… but help is still available.

While Shulkin said in the Oval Office that the order would cover 100% of “all separating military members,” he told reporters earlier Tuesday that this program will apply only to those veterans whose discharge status wouldn’t bar them from collecting other Veteran Affairs benefits — meaning vets with other-than-honorable or bad conduct and dishonorable discharges can’t qualify. However, last year, the VA launched a separate program offering emergency mental health services for veterans with these “bad paper” discharges, and Shulkin said that program is still in effect.

In an email to Task & Purpose Wednesday, VA Press Secretary Curtis Cashour confirmed this. “In order to be eligible for coverage under the executive order, former service members must (1) have served in the active military, naval, or air service, and (2) have been discharged or released therefrom under honorable conditions,” Cashour wrote. “At the signing event, Sec. Shulkin was referring to honorably discharged Veterans – 100 percent of whom will be eligible for VA mental health care under the executive order – as opposed to the 40 percent of recently separated Veterans who are eligible for VA health care.”

This can help a lot of vets with a lot of concerns, but its primary aim is veteran suicide.

“That 12-month period after you leave service is the highest risk for suicide,” Shulkin explained in the Oval Office. “Almost one and a half to two times” the risk for all veterans”

An estimated 20 U.S. veterans die by suicide each day, and last year, President Trump tasked Shulkin with getting that number to zero.

This photo from Saturday, May 17, 2014 shows the Department of Veterans Affairs in Phoenix. Matt York/Associated Press

If you’re still in for now, help is available through DoD under this order, too.

To assist transitioning veterans who may need mental health services, the Defense Department will expand its peer outreach services to provide support to service members in the year leading up to their discharge from the military. Additionally, the Military OneSource program — which offers face-to-face counseling, a 24-hour call line, and a variety of other resources — will expand its services from 180 days to one year for transitioning vets.

More details on the program are coming in March.

The Department of Veterans Affairs, Defense and Homeland Security have two months from the date the executive order was signed to provide the president a “Joint Action Plan” that lays out “concrete actions to provide, to the extent consistent with law, seamless access to mental health treatment and suicide prevention resources for transitioning uniformed service members in the year following discharge, separation, or retirement.”

“The joint action plan will describe concrete actions we must take to ensure every single veteran who needs mental health and suicide prevention services will receive them immediately upon their separation from military service,” President Trump said during the signing. “They get out of the military, and they had nobody to talk to, nobody to speak to. And it’s been a very sad situation, but we’re taking care of them.”

Update, 2:00 p.m. EST, 1/10: This post has been updated with comments from VA Press Secretary Curtis Cashour confirming that the new order will not extend benefits to veterans who weren't honorably discharged.