Who Is The ‘Old-Style Soviet Type’ Ambassador Who Keeps Getting Trump’s Team In Trouble?

Retired Army Lt. Gen. Michael Flynn misrepresented details of a call with him and had to resign as national security … Continued 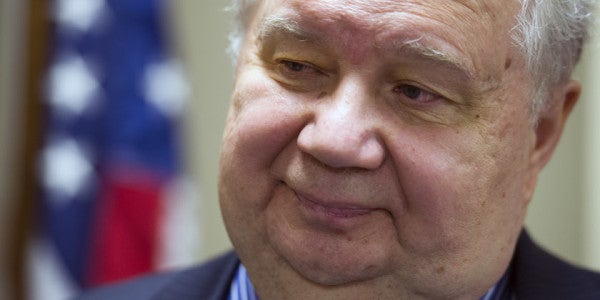 Retired Army Lt. Gen. Michael Flynn misrepresented details of a call with him and had to resign as national security advisor. Attorney General Jeff Sessions met with him twice during the presidential campaign, and has now recused himself from any investigation into Russian interference in the election. Who is this man that keeps getting Trump administration officials in trouble, just by meeting with them amid these tense times with Russia? Russian Ambassador to the United States Sergey Kislyak.

Kislyak cut his teeth as an expert on disarmament in the former Soviet Union. He served as an envoy to the United States during the final years of the Soviet Union in the late 1980s. From 1998 to 2003, Kislyak was Russia’s ambassador to Belgium, a role that also made him Russia’s top envoy to NATO.

Kislyak has been Russian ambassador to the United States for nine years, an “unusually long spell,” according to one CNN profile.

CNN also cited anonymous officials in the U.S. intelligence apparatus, who described Kislyak as “a top spy and recruiter of spies.”

The Kremlin has vigorously denied this claim, calling Kislyak “a world-class diplomat,” in the same CNN report.

We certainly know that Kislyak’s calls and other communiqués are regularly intercepted by U.S. intelligence; that’s how the real details of his call with Flynn got out.

In December, amid revelations of Russian interference in the U.S. presidential election, then-President Barack Obama expelled 35 of Kislyak’s fellow diplomats from the United States.

For his part, Sessions said, “I thought he was pretty much of an old-style Soviet type,” in a press conference describing their September meeting in Session’s Senate office.

CORRECTION: An earlier version of this article incorrectly referred to Kislyak as the U.S. ambassador to Russia. He is the Russian ambassador to the United States. (Updated: 3/6/2017; 9:10 pm)