President Donald Trump put together an impromptu episode of “Drunk History” on Wednesday during a cabinet meeting when he explained... 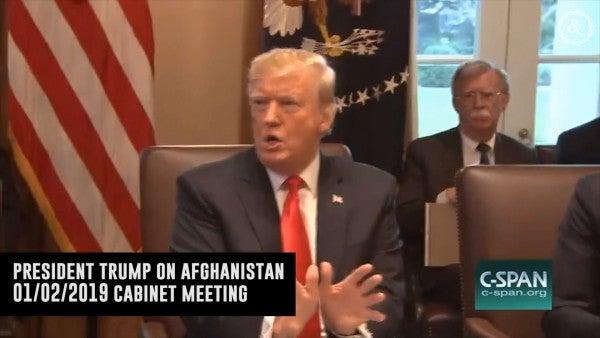 President Donald Trump put together an impromptu episode of “Drunk History” on Wednesday during a cabinet meeting when he explained how “Russia used to be the Soviet Union” but then “Afghanistan made it Russia” because they invaded in 1979.

He also endorsed the Soviet invasion as “right,” although the U.S. State Department says nuh uh.

“So you take a look at other countries,” he continued. “Pakistan is there. They should be fighting. Russia should be fighting. The reason Russia was in Afghanistan, was because terrorists were going into Russia, they were right to be there. The problem is it was a tough fight and literally they went bankrupt, they went into being called Russia again as opposed to the Soviet Union. You know, a lot of these places you're reading about now are no longer apart of Russia because of Afghanistan.”

Let's put down the beer and unpack this: Trump first mentions Pakistan as being there and that they should be fighting. Well, they are, but they're fighting alongside the Taliban, which it funnels weaponry and support to through its intelligence service, the ISI. The same goes for Russia.

And then you have the claim that terrorists were going into Russia, which is why it invaded in the first place. As conservative columnist Max Boot points out, Trump was probably getting Russia confused with Chechnya. Not even the Soviet Army's General Staff made this argument, ever.

So anyway, the episode is above. This also makes me think I would watch the shit out of a show called Trump Explains History. Make that happen, Mark Burnett.