Rep. Seth Moulton was one of several veterans currently serving in Congress who picked apart the president's rationale for leaving Syria and Afghanistan 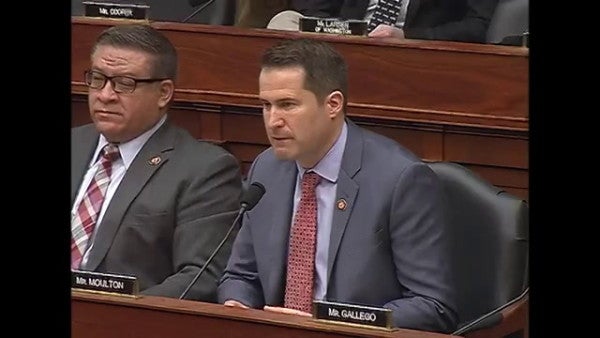 Top defense officials could not hide the daylight between the Pentagon and President Donald Trump on Wednesday as they faced withering questions from veterans in Congress about the president's plans to withdraw from Syria and eventually Afghanistan.

“Mr. West, your former boss Secretary [James] Mattis disagreed with the president's plan to withdraw from Syria,” said Moulton, a Marine veteran who served in Iraq. “Do you think he was wrong?”

After a pause, West approached his microphone and answered, “No sir.”

Moulton was one of several veterans serving in Congress who picked apart the president's rationale for leaving Syria and Afghanistan on Wednesday.

Earlier in the hearing, Moulton had pressed Air Force Maj. Gen. James Hecker, vice director of operations for the Joint Staff, about how the U.S. military could keep its boot on ISIS' neck if all troops left Syria.

Hecker conceded that the U.S. military would be in “a very difficult situation” but would work with the Syrian Democratic Forces as well as surrounding countries, including Iraq, Jordan, and Turkey, to help allied forces inside Syria without having any of its own forces inside the country.

“So, general, what you are saying is it does not keep up the pressure; and so therefore, it's going to be difficult to do so,” Moulton countered.

“No,” Hecker replied, “I said it's going to be difficult to keep up the pressure. But that's what we're doing …”

But Moulton interrupted to ask Hecker, “Do you disagree with my statement that it does not keep up the pressure to withdraw from Syria?”

“OK, we're playing a game of semantics here, but it's pretty clear it decreases the pressure,” Moulton shot back.

During his State of the Union speech on Tuesday, Trump did not say when U.S. troops will be returning from Syria and Afghanistan, but he called for an end to “endless wars” and said it was “time to give our brave warriors in Syria a warm welcome home.”

However, lawmakers from the president's own party expressed skepticism on Wednesday about withdrawing troops from either country.

Rep. Michael Waltz (R-Fla.) argued at Wednesday's hearing that U.S. special operations forces would not enjoy the same successful relationship with Syrian Arab and Kurdish forces if they could no longer fight alongside them.

A former Green Beret, Waltz asked how pulling all troops from Syria would affect the U.S. military's mission to advise and assist allied forces.

“Sir, militarily, we will be less effective,” West replied.

Rep. Jim Banks (R-Ind.), a former Navy reservist, continued the bipartisan bludgeoning by getting West to acknowledge that ISIS-Khorasan is growing in Afghanistan.

While special operations forces have not been ordered to withdraw some or all of its troops from Afghanistan, “A significant or sudden drawdown of our counter terror ability or footprint would be a risk,” West said.