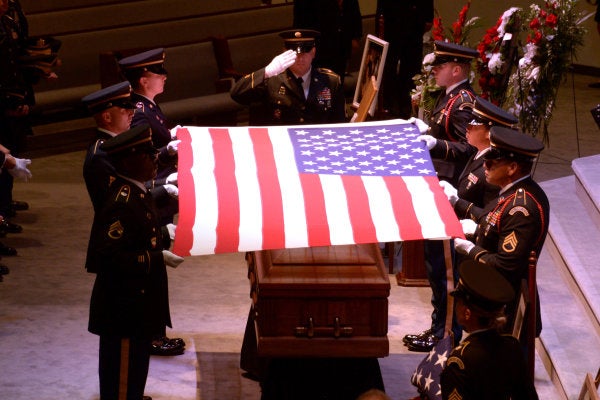 The terror group claimed responsibility for the attack through its Amaq news agency, which it said was done by a suicide bomber wearing an explosive vest. Initial reports said more than a dozen people were killed in the blast.

Two American service members, one DoD civilian, and one DoD contractor were killed in the blast, according to U.S. Central Command. Three more service members were injured.

“An explosion hit near a restaurant, targeting the Americans, and there were some forces for the Manbij Military Council with them,” one witness told Reuters.

Army Col. Sean Ryan, a spokesman for Operation Inherent Resolve, confirmed that U.S. troops were killed “during an explosion while conducting a routine patrol in Syria.”

U.S. service members were killed during an explosion while conducting a routine patrol in Syria today. We are still gathering information and will share additional details at a later time.

“Allow me to extend on behalf of the Department of Defense, our thoughts and prayers to the families and team members of those killed and wounded during today's attack in Manbij,” Shanahan said. “Our fight against terrorism is ongoing and we will remain vigilant and committed to its destruction.”

“Today is a stark reminder of the dangerous missions that men and women in uniform perform on our behalf each and every day.”

Shanahan did not answer a question from Task & Purpose about whether the Manbij attack would affect the withdrawal of U.S. troops from Syria, which President Donald Trump announced in December – prompting former Defense Secretary James Mattis to resign the following day.

Vice President Mike Pence said on Wednesday that both he and President Trump condemn the attack against U.S. troops in Manbij.

“Our hearts are with the loved ones of the fallen,” Pence said in a statement. “We honor their memory and we will never forget their service and sacrifice.

“Thanks to the courage of our armed forces, we have crushed the ISIS caliphate and devastated its capabilities. As we begin to bring our troops home, the American people can be assured, for the sake of our soldiers, their families, and our nation, we will never allow the remnants of ISIS to reestablish their evil and murderous caliphate – not now, not ever.”

White House spokeswoman Sarah Sanders told reporters the president has been briefed on the attack and referred questions to the Pentagon. In a statement, Sanders said, “our deepest sympathies and love go out to the families of the brave American heroes who were killed today in Syria. We also pray for the soldiers who were wounded in the attack. Our service members and their families have all sacrificed so much for our country.”

Master Sgt. Jonathan J. Dunbar – reportedly a member of the Army's elite Delta Force – and a British service member were killed on March 30, 2018 in Manbij. Dunbar was on a mission to capture or kill an ISIS member when an improvised explosive device went off.

“ISIS has a network of sleeper cells across formerly ISIS-held terrain and is activating them as part of a planned resurgence,” Jennifer Cafarella, of the Institute for Understanding War think tank, told Task & Purpose. “ISIS's attack in Manbij demonstrates the threat ISIS poses in its insurgent form and foreshadows the resurgence that will occur as security gaps grow after an American withdrawal.”

UPDATE: This story was updated at 2:45 p.m. on Jan. 16 with comments from Acting Defense Secretary Patrick Shanahan and Vice President Mike Pence.

This post will be updated as we learn more.