As 2018 draws to a close, it is unclear if U.S. troops and their Arab-Kurdish allies have made a dent... 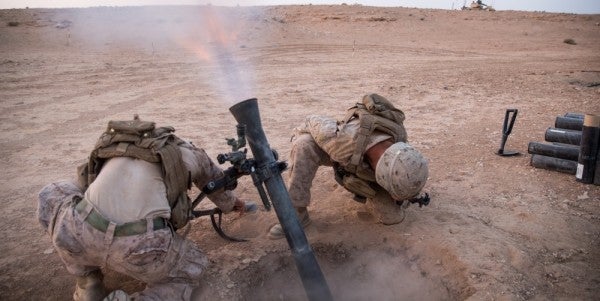 As 2018 draws to a close, it is unclear if U.S. troops and their Arab-Kurdish allies have made a dent in ISIS’ last stronghold in Syria.

A spokesman for U.S. military operations in Iraq and Syria estimated in December 2017 that fewer than 3,000 ISIS fighters remained in both countries. Since then, defense officials have said consistently that roughly 2,000 ISIS fighters are trapped in Syria’s Middle Euphrates River Valley.

Army Col. Sean Ryan, a spokesman for Operation Inherent Resolve, repeated the 2,000 figure when briefing reporters on Tuesday. However, it is difficult to determine exactly how many ISIS fighters remain in their last enclave in Syria because they are dug in deeply and the terrain is difficult for combat operations, he said.

“The numbers game is difficult to count because ISIS is underground – they’re in tunnels; they’re hiding,” Ryan said. “So it’s not like we watch them walk into to a building and we’re counting as they go in. They’re spread apart.”

When asked about why the numbers had not changed, Ryan told Task & Purpose in an email there could be a variety of factors: “In October, Gen. Dunford stated new followers were arriving, mostly over the Turkish border, at a rate of about 100 a month.”

“The early estimates from December probably did not take into account the elaborate industrial strength tunnels where many ISIS were hiding in the MERV and the size of the area. The 3,000 may have been conservative and currently, we believe it is around 1,500-2,000, and more difficult to reinforce now with stricter border security throughout the region.”

Ryan didn’t mention that the Syrian Democratic Forces were on the verge of crushing ISIS in Syria when the Turks invaded and occupied the Syrian Kurdish town of Afrin in January, bringing the offensive to a halt. Although combat operations against ISIS were later renewed, the momentum had been lost.

Still, the U.S. military and SDF have made progress in cutting off ISIS’ logistics and money flow and containing the remaining fighters to the Middle Euphrates River Valley, Ryan said at Tuesday’s briefing.

Right now, ISIS now holds less than 1 percent of its original geographic caliphate, which once stretched across Syria and Iraq, Ryan said. By way of comparison, U.S. military officials estimated at the start of the year that ISIS still held about 2 percent if its former territory.

Ryan acknowledged that ISIS had recently caught the Syrian Democratic Forces off-guard in a surprise attack, which reportedly began late last week. About 80 SDF fighters have been killed in the fighting, but the U.S. allies have managed to regain all the territory that was lost.

“It’s a very difficult fight,” Ryan said at the briefing. “This is definitely not Mayberry. People are dying. For the ISIS side, it’s fight to the end. Basically, they came up with a counter-attack in poor weather conditions.

“Anyone can have a good day any given Sunday and they had theirs. Sometimes war is give and take. You’re going to have good days and bad days. The enemy just happened to have one good day and then the SDF beat them right back.”