ISIS is down to its last few hundred fighters and less than a square kilometer of land in a battle for its final Syrian stronghold, although it may have 15,000-20,000 armed adherents in Syria and Iraq, U.S. envoy James Jeffrey said on Friday 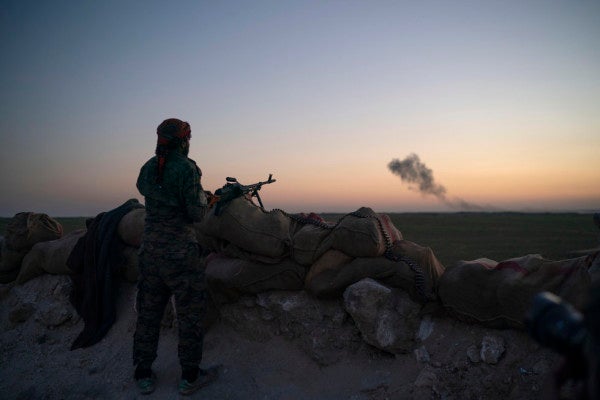 GENEVA (Reuters) – ISIS is down to its last few hundred fighters and less than a square kilometer of land in a battle for its final Syrian stronghold, although it may have 15,000-20,000 armed adherents in Syria and Iraq, U.S. envoy James Jeffrey said on Friday.

“We are just about finished with the campaign along the Euphrates to defeat the last territorial holdings of the 'caliphate'. They're down to a few hundred fighters and less than a square kilometer of land,” said Jeffrey, the U.S. Special Representative for Syria Engagement and Special Envoy to the Global Coalition to Defeat ISIS (Islamic State).

Jeffrey said the United States was helping the Syrian Democratic Forces in Syria to secure IS prisoners but was also launching a campaign to get countries to take back foreign fighters and their families, to prosecute or re-educate them.

Islamic State redrew the map of the Middle East in 2014 when it declared its ultra-radical Sunni Islamist “caliphate” and established a rule known for mass killings, sexual enslavement and meting out punishments such as crucifixion.

The militants suffered their major military defeats in 2017, when they lost the cities of Mosul in Iraq and Raqqa in Syria. They were then forced down the Euphrates River to their last bastion at Baghouz, a cluster of hamlets on the eastern bank.

“We believe that there's between 15,000 and 20,000 Daesh armed adherents active, although many are in sleeper cells, in Syria and in Iraq,” Jeffrey said, using an Arabic acronym for Islamic State.

Speaking to reporters on a video call after attending a Syria humanitarian conference in Brussels, Jeffrey said the struggle to defeat Islamic State ideology would go on and there was no timetable for a full U.S. withdrawal from Syria.

Some troops would be pulled out but a contingent would stay in northeastern Syria, backed by coalition partners and control of air space, to continue the fight and prevent a destabilizing vacuum developing.

The United States would also maintain a force at al-Tanf close to the Iraqi and Jordanian borders to bolster local forces against Islamic State.

With a smaller force and much less combat after the territorial defeat of IS in Syria, U.S. costs would be far less, he said. In 2018, U.S. military operations in Syria cost about $2 billion out of a total defense budget of $700 billion, mainly expenditure on precision-guided munitions.

READ MORE: A Marine Raider Was Awarded The Silver Star For Taking Out An ISIS Car Bomb Car Bomb