The operation to take ISIS last enclave in eastern Syria looked close to an end on Wednesday, with no sign of clashes as U.S.-backed fighters said they were combing the area for hidden jihadists 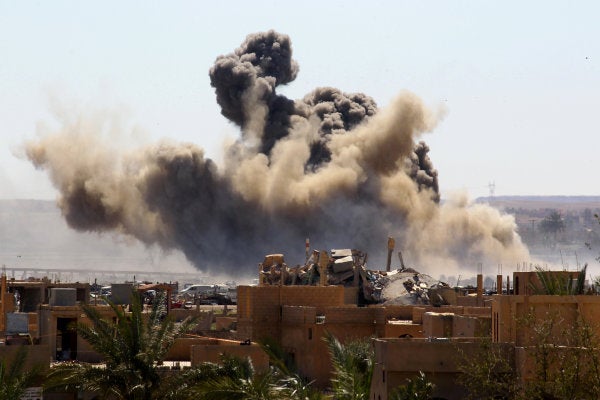 BAGHOUZ, Syria (Reuters) – The operation to take Islamic State's last enclave in eastern Syria looked close to an end on Wednesday, with no sign of clashes as U.S.-backed fighters said they were combing the area for hidden jihadists.

Reuters reporters overlooking Baghouz from a hill on the bank of the Euphrates at the Iraqi border said the area was calm, and the Syrian Democratic Forces (SDF) militia searched for tunnels and landmines, an SDF official said.

The SDF on Tuesday captured an encampment where the jihadists had been mounting a last defense of the tiny enclave, pushing diehard fighters onto a sliver of land at the Euphrates riverside.

There was no immediate update from the SDF on Wednesday on the fate of these remaining militants. A group of women and children were seen being evacuated from the Baghouz area.

Islamic State's defeat at Baghouz would end its territorial control over the third of Syria and Iraq it held in 2014 as it sought to carve out a huge caliphate in the region.

While it would represent a significant milestone in Syria's eight-year-old war and in the battle against Islamic State, the jihadist group remains a threat.

A fighter of Syrian Democratic Forces is seen on a military vehicle in the village of Baghouz, Deir Al Zor province, Syria, March 18, 2019

Some of the group's fighters remain holed up in the central Syrian desert and others have gone underground in Iraqi cities to wage an insurgent campaign to destabilize the government.

For the SDF, it would cap a four-year military campaign in which its fighters drove Islamic State from swathes of northeastern Syria with the help of a U.S.-led coalition, taking the city of Raqqa after a months-long battle in 2017.

The group was also forced into retreat by numerous other local and foreign forces roused by its public displays of bloodletting and the attacks it plotted abroad.

Its enclave at Baghouz was the last part of the massive territory it suddenly seized in 2014, straddling swathes of Iraq and Syria, where its leader Abu Bakr al-Baghdadi declared a new caliphate.

His fate, along with other Islamic State leaders, is not known, though the United States has said it believes him to be in Iraq.

The group's supporters in Baghouz faced months of siege, pounded by coalition air strikes. Over the past two months, some 60,000 people poured out of the shrinking IS territory.

About half of that number were civilians, the SDF has said, including some Islamic State victims such as enslaved women from Iraq's Yazidi religious community.

The others were the group's supporters including about 5,000 fighters. In recent days, as the enclave shrank, the SDF said hundreds more of them started to surrender, or were captured trying to escape.

Most of those who left were moved to displacement camps in northeast Syria. The fighters were detained, but the SDF has urged foreign countries to take back their citizens, causing a dilemma for some Western states who see them as a threat.