Syrian Kurdish forces say they have captured eight foreign-born ISIS fighters, one of whom is an American-born teenager. 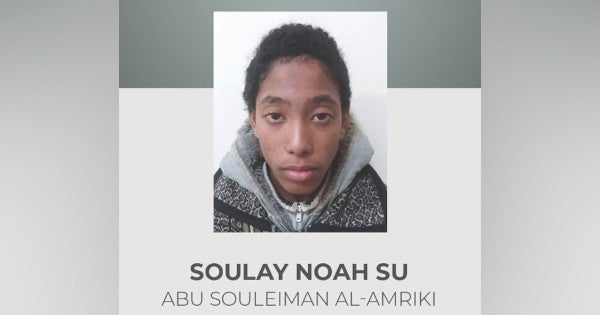 Syrian Kurdish forces say they have captured eight foreign-born ISIS fighters, one of whom is an American-born teenager.

Soulay Noah Su, aka Abu Souleiman al-Amriki, 16, was purportedly captured during the Jazeera Storm military operation in Hajin sometime around Jan. 6 or 7th, according to a press statement from the YPG. Su was reportedly picked up along with seven other foreigners of various ages, including one German and one Russian, among others.

The announcement of a captured American teen comes just days after the Syrian Democratic Forces announced it had arrested two American adults during the same operation. Warren Christopher Clark, aka Abu Mohammad al-Ameriki, and Zaid Abed al-Hamid, aka Abu Zaid al-Ameriki, were among five foreigners the SDF said it had nabbed as they were “trying to get out of the war zone.”

The YPG claimed the American teen and seven others it had captured were planning to attack civilians in the area in order to “slow down the progress of our forces.”

U.S. Central Command did not immediately respond to a request for comment from Task & Purpose.