ISIS leader known as ‘Jabba the Hutt’ captured in Mosul 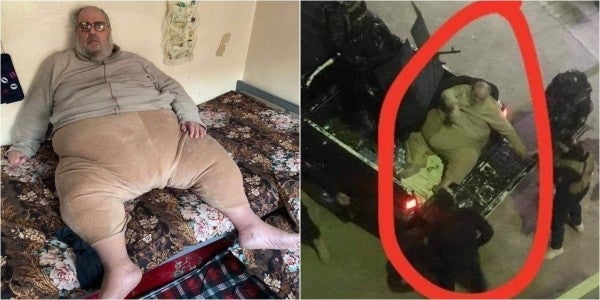 The Iraqi government on Thursday announced the capture of ISIS mufti Abu Abdul Bari, widely known as the terror group's “very own Jabba the Hutt,” according to Stars and Stripes.

Bari was captured in Mosul, the former capital of the so-called ISIS “caliphate” in Iraq.

Bari, also known as Shifa al-Nima, was known in ISIS circles for “provocative speeches against the security forces” and considered a top leader of the “ISIS gangs” that continue to plague the country, the Iraqi government announced on Twitter.

Bari is also responsible for issuing a fatwa for the July 2014 destruction of a mosque believed to be the burial place for the prophet Jonah of “Jonah and the Whale” fame, the Iraqi government said.

Photos circulating on social media show the arrest of Bari in exquisite detail:

Latest photos for #ISIS Mufti. He was the strongest supporter of demolishing Mosul heritage. He used to give the Friday Sermon in my neighborhood. He cheered up in the very Friday after the blowing of Prophet Jonah Mosque in the early days of their invasion.
? Social media https://t.co/VWOCR4nmJE pic.twitter.com/zGYoVSuAaF

That's it. That's the post. Leave your jokes in the comments below — and make 'em good.