'In the time that I have been in Iraq, we've taken a couple of casualties from ISIS fighting on the ground, but most of the attacks have come from those Shia militia groups, who are launching rockets at our bases and frankly just trying to kill someone to make a point.' 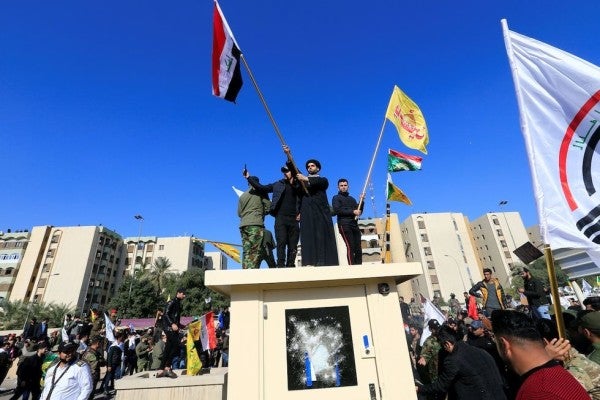 “In the time that I have been in Iraq, we've taken a couple of casualties from ISIS fighting on the ground, but most of the attacks have come from those Shia militia groups, who are launching rockets at our bases and frankly just trying to kill someone to make a point,” Grynkewich said Wednesday at an event hosted by the Air Force Association's Mitchell Institute for Aerospace Studies.

Iranian militia fighters are also operating in predominantly Sunni areas such as Anbar province, where they are nominally responsible for border security and other missions that had been carried out by local tribal forces, he said.

In Nineveh province, for example, a Popular Mobilization Forces unit has set up checkpoints just to extort local Iraqis.

There are more than 100 Shiite militia groups in Iraq, some of which take their orders from Iran, Grynkewich said. It is not yet clear whether Iran will be able to continue shepherd all of their proxies in Iraq now that the U.S. military has killed Maj. Gen. Qasem Soleimani, the former head of the Islamic Revolutionary Guard Corps' elite Quds Force.

So far, there has not been an increase of attacks on U.S. troops by Shiite forces in retaliation for Soleimani's death, he said.

“What we've assessed is that we can probably expect continued – I call it 'harassing fire,'” Grynkewich said. “We saw that just a couple nights ago with the Baghdad embassy complex. We've seen it at a couple of other of bases over the last few weeks.”

One group of Shiite fighters that is not under direct Iran command and control is anti-American cleric Muqtada al-Sadr's militia, Grynkewich said.

“We don't actually see them as being Iranian influenced,” Grynkewich said. “We see them as being controlled him. Sometimes his interests align with the Iranians and sometimes they don't. He's a fairly independent operator.”

Meanwhile, ISIS has tried to establish sleeper cells in places such as Raqqa, Syria, and Mosul, Iraq, but for the most part the terrorist group is “just trying to survive,” Grynkewich said.

Right now, there are “thousands” of ISIS fighters in both Iraq and Syria, he added; however, their level of commitment to the cause varies.

In an area of Iraq stretching from Diyala province in the east to parts of Anbar province in the west, ISIS is able to extort the local population but not hold territory for very long, he said.

“They might have a safe haven on a mountain or in dry stream bed, a wadi system, maybe in some caves; they come out of those at night; go down, shake down some folks; maybe kidnap for extortion; maybe threaten to burn over farmers' fields if they don' turn over crops,” Grynkewich said. “And then they retreat back to those supposed safe havens.”

But as a result of Soleimani's death, most U.S. efforts to train Iraqi security forces have been suspended, said Grynkewich, who declined to say “what precisely is going on and what's not going on.”

The U.S. and Iraqi governments are in discussions about when to resume full security cooperation, he said.

“Over the longer term, the less pressure that is put on ISIS – given that those underlying conditions still exist – we certainly want to get back to providing that overall pressure to keep them down and ensure their enduring defeat,” Grynkewich.

Even though ISIS has lost its caliphate, the group was able to preserve its combat power by having roughly 10,000 male fighters surrender to the Syrian Democratic Forces while female ISIS fighters infiltrated refugee camps holding ISIS family members, he said.

“The long-term concern that I think we should all have is there are no educational opportunities besides what those mothers are providing their children,” Grynkewich said. “So they are being indoctrinated into that ISIS ideology and mindset.”