It was unclear whether the soldiers will eventually go to Iraq. 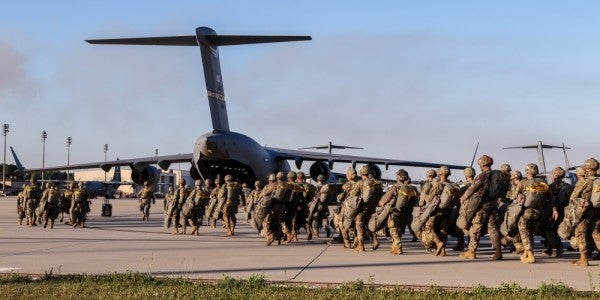 The Pentagon is dispatching about 750 paratroopers from the 82nd Airborne Division to the Middle East in response to an attack on the U.S. embassy in Baghdad by Iranian-backed militia fighters, Defense Secretary Mark Esper announced on Tuesday.

“This deployment is an appropriate and precautionary action taken in response to increased threat levels against U.S. personnel and facilities, such as we witnessed in Baghdad today,” Esper said in a statement, “The United States will protect our people and interests anywhere they are found around the world.”

It was unclear whether the soldiers will eventually go to Iraq but during the lead-up to the first surge, it was common for Army and Marine Corps units to deploy to Kuwait before being sent to Iraq.

However, the United States and Iraq have agreed to a troop-cap of about 5,000 U.S. service members in Iraq. The Pentagon has not said whether the Iraqi government would have to approve a troop increase above the cap.

About 100 Marines have already arrived at the embassy in Baghdad to reinforce security after Tuesday's attack by Popular Mobilization Forces, which are Shiite militias that Iran has used as proxy forces inside Iraq and Syria.

Before the deployment was announced, President Donald Trump tweeted that Iran would be held “fully responsible” for the deaths of any U.S. personnel or damage to American facilities in Iraq.

“They will pay a very BIG PRICE!” Trump tweeted. “This is not a Warning, it is a Threat. Happy New Year!”

Tuesday's embassy assault came just days after the U.S. military launched airstrikes on the Iranian-backed militia Kata'ib Hezbollah in retaliation for a rocket attack on a base in Kirkuk that killed an American contractor and wounded several U.S. service members.

“At the direction of the Commander in Chief, I have authorized the deployment of an infantry battalion from the Immediate Response Force (IRF) of the 82nd Airborne Division to the U.S. Central Command area of operations in response to recent events in Iraq.

“Approximately 750 soldiers will deploy to the region immediately, and additional forces from the IRF are prepared to deploy over the next several days.

“This deployment is an appropriate and precautionary action taken in response to increased threat levels against U.S. personnel and facilities, such as we witnessed in Baghdad today. The United States will protect our people and interests anywhere they are found around the world.”