'What the president said was he believed it probably could have been. He didn't cite intelligence.' 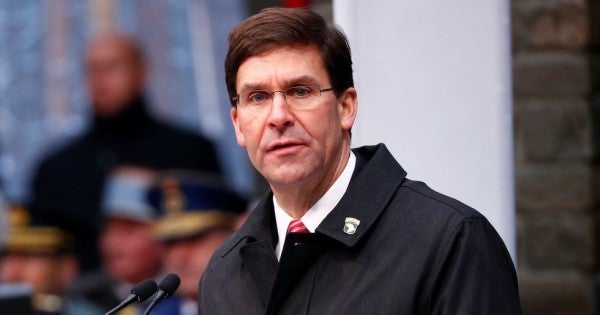 Speaking on CBS News, Esper told “Face the Nation” host Margaret Brennan that the president did not cite a specific piece of evidence that indicated Soleimani was plotting to attack the four embassies that Trump mentioned.

“Are you saying there wasn't one?” Brennan asked.

“I didn't see one with regard to four embassies,” Esper replied. “What I'm saying is I share the president's view that, probably, my expectation was they were going to go after our embassies.”

“I can reveal that I believe it probably would've been four embassies,” the president told Ingraham.

But in a lengthy back-and-forth with CNN's Jake Tapper, Esper once again could not say if any intelligence justified Trump's claim.

“The president never said there was specific intelligence to four different embassies,” Esper said on Sunday's edition of “State of the Union.”

“He said he believed it,” Tapper interjected.

“And I believe it too,” Esper replied. “I believe there were threats to multiple embassies. That's why we reinforced embassies with additional troops.”

The United States has sent about 100 Marines to the U.S. embassy in Baghdad and roughly 3,500 paratroopers from the 1st Brigade Combat Team, 82nd Airborne Division to Kuwait in case they are needed in Iraq. A contingent of Rangers from the 75th Ranger Regiment and elements of the 173rd Airborne Brigade Combat Team have also deployed to the region.

Esper said the U.S. government had “exquisite intelligence” that Soleimani was planning multiple attacks that could have led to war between Iran and the United States, but he was unable to explain to Tapper why both he and the president believe that four U.S. embassies were on Soleimani's target list.

“I'm not going to discuss intelligence matters here on the show,” Esper said. “What the president said was he believed: He said he could have been targeting – all of those things that I believe as well, that the national security team believes as well.”

When Tapper pressed Esper to say what evidence the Trump administration had to justify the president's belief that four U.S. embassies were at risk, Esper repeated the U.S. government's claim that Soleimani wanted to attack the U.S. embassy in Baghdad.

“I'm not going to discuss intelligence,” Esper said. “What the president said was he believed it probably could have been. He didn't cite intelligence.”