Trump to Iran: If you attack us, we’ll hit the same number of targets as US hostages you took in 1979

'Those targets, and Iran itself, WILL BE HIT VERY FAST AND VERY HARD,' the Trump tweeted on Saturday. "The USA wants no more threats!' 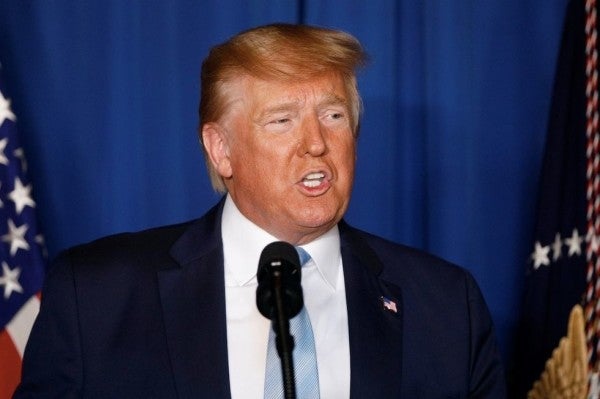 President Donald Trump issued an unusual warning on Saturday that if Iran launches any reprisal attacks for the death of Maj. Gen. Qasem Soleimani, the U.S. military is prepared to strike 52 Iranian targets — one for each of the hostages that the Iranians held for more than a year after seizing the U.S. embassy in Tehran in 1979.

The potential targets include some that are “very high level & important to Iran & the Iranian culture,” the president said in a series of three tweets on Saturday evening.

“Those targets, and Iran itself, WILL BE HIT VERY FAST AND VERY HARD,” the president tweeted. “The USA wants no more threats!”

Iran is talking very boldly about targeting certain USA assets as revenge for our ridding the world of their terrorist leader who had just killed an American, & badly wounded many others, not to mention all of the people he had killed over his lifetime, including recently….

….hundreds of Iranian protesters. He was already attacking our Embassy, and preparing for additional hits in other locations. Iran has been nothing but problems for many years. Let this serve as a WARNING that if Iran strikes any Americans, or American assets, we have…..

….targeted 52 Iranian sites (representing the 52 American hostages taken by Iran many years ago), some at a very high level & important to Iran & the Iranian culture, and those targets, and Iran itself, WILL BE HIT VERY FAST AND VERY HARD. The USA wants no more threats!

Shortly after the president’s tweets, the top U.S. military spokesman in Iraq confirmed that Baghdad’s Green Zone and Balad Air Base had come under rocket attacks on Saturday. No U.S. service members were injured.

“We have increased security and defensive measures at the Iraqi bases that host anti-ISIS coalition troops,” Army Col. Myles Caggins said in a statement. “Our command places protection of coalition personnel and security partners as the top priority; we remain vigilant and resolute.”

The former head of the Islamic Revolutionary Guards Corps’s elite Quds Force, Soleimani was
killed on Friday by a U.S. airstrike near Baghdad International Airport.The Pentagon blames Soleimani for the deaths of more than 600 troops in Iraq from 2003 to 2011.

So far, the U.S. government has not confirmed that Abu Mahdi al-Muhandis, leader of Kata’ib Hezbollah and deputy commander of the commander of the Popular Mobilization Forces, was also killed in Friday’s strike.

Secretary of State Mike Pompeo tweeted on Saturday that Kata’ib Hizballah is urging Iraqi security forces to abandon their posts at the U.S. embassy in Baghdad and other installations where they work with U.S. personnel.

Roughly 100 Marines recently arrived at the embassy following
a Dec. 31 attack by Iranian proxies. Thousands of paratroopers with the 1st Brigade Combat Team, 82nd Airborne Division are also headed to Kuwait in case they are needed.

Army Gen. Mark Milley, chairman of the Joint Chiefs of Staff, claimed recently that the U.S. military has so much combat power at the embassy now that anyone who tries to attack it will
“run into a buzz saw.”