"[I]t doesn’t really matter because of his horrible past!" 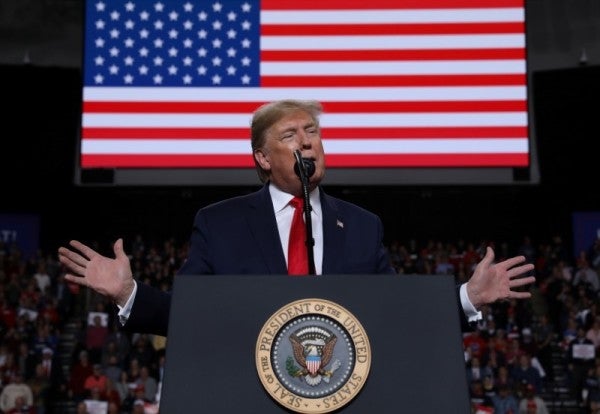 “The Fake News Media and their Democrat Partners are working hard to determine whether or not the future attack by terrorist Soleimani was 'imminent' or not, & was my team in agreement,” Trump wrote on Twitter.

“The answer to both is a strong YES., but it doesn't really matter because of his horrible past!”

Democrats, who are trying to pass legislation to rein in Trump's ability to wage war on Iran without lawmakers' approval, have sharply disagreed.

“You cannot take military action against another nation without congressional consent unless to defend against an imminent attack,” Democratic Senator Chris Murphy said on Twitter.

“It's clear now this was an illegal action. That also has made America less safe,” he said, noting an NBC News report that Trump had authorized the killing of Soleimani seven months ago.

Since confirming Soleimani was killed by a U.S. air strike in Baghdad, administration officials have said they acted because of an imminent risk of attacks on American diplomats and service members in Iraq and throughout the region.

But lawmakers, including some Republicans as well as Democrats, have said the administration has failed to show any evidence that an attack was imminent.

Trump's fellow Republicans have justified the killing by citing Soleimani's history, and accuse Democrats of playing politics. Relations between the two parties are at a particularly difficult juncture, given the vote last year to impeach Trump in the Democratic-led House and his upcoming trial in the Republican-led Senate.

“We appear to have restored a measure of deterrence in the Middle East. So let's not screw it up,” McConnell said.

Democrats and a few Republicans in Congress have said they have not been given adequate, detailed briefings.

Some have also argued that the U.S. Constitution gives Congress, not the president, the authority to declare war, and called for the Senate and House of Representatives to act to take that authority back from the White House.

Reflecting deep divisions in Washington over Trump's Iran policy, the House voted nearly along party lines last week to pass a war powers resolution that would force the president to seek congressional approval for further military action against Iran.

Three Republicans backed the resolution and eight Democrats – who control a majority in the House – voted against it.

A companion measure has been introduced in the Senate, and McConnell said he expected debate on it to start “very soon.”

Last week Trump posited in an interview that Iran had been poised to attack four American embassies before Soleimani was killed in a U.S. drone strike on Jan. 3. But on Sunday U.S. Defense Secretary Mark Esper said he did not see specific evidence that Iran was planning an attack.

“What the president said was that there probably could be additional attacks against embassies. I shared that view,” Esper said. “The president didn't cite a specific piece of evidence.”

When pressed on whether intelligence officers offered concrete evidence on that point, Esper said: “I didn't see one with regards to four embassies.”