President Donald Trump said on Tuesday the military may consider disciplining former National Security Council aide Alexander Vindman, who testified in Trump's impeachment trial and was fired by the White House along with his twin brother 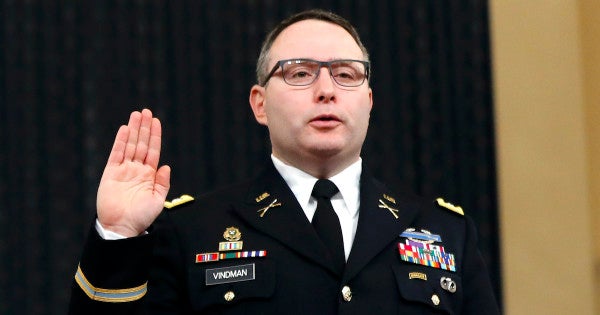 WASHINGTON (Reuters) – President Donald Trump said on Tuesday the military may consider disciplining former National Security Council aide Alexander Vindman, who testified in Trump's impeachment trial and was fired by the White House along with his twin brother.

Vindman, an Army lieutenant colonel, provided some of the most damaging testimony during an investigation by the U.S. House of Representatives of Trump's dealings with Ukraine.

“We sent him on his way to a much different location and the military can handle him any way they want,” Trump said.

Asked if he was suggesting that Vindman face disciplinary action, Trump said that would be up to the military.

“If you look at what happened … they're going to certainly, I would imagine, take a look at that,” Trump said.

Vindman, then the NSC's top Ukraine expert, testified that Trump's request for an investigation into former Vice President Joe Biden, a potential Democratic political rival in the 2020 presidential election, and his son Hunter during a July phone call with Ukraine President Volodymyr Zelenskiy was improper.

“I obviously wasn't happy with the job he did,” Trump said of Vindman. “First of all he reported a false call … what was said on the call was totally appropriate.”

Trump's national security adviser, Robert O'Brien, said the president is entitled to have White House staffers who want to execute his policies and whom he has confidence in. O'Brien, speaking at the Atlantic Council think tank, said it was his decision that the Vindmans leave their White House jobs.

“We're not a country where a group of lieutenant colonels can get together and dictate what the policy of the United States is,” O'Brien said.

Defense Secretary Mark Esper said in November that Vindman should not fear retaliation over his testimony. Esper said he had reinforced the “no retaliation” message in a conversation with the secretary of the Army.

Trump has repeatedly complained about Vindman's testimony and called him insubordinate.

O'Brien said there was “absolutely no retaliation with respect to the Vindmans as far as impeachment goes.”

Vindman was escorted from the White House last week as was his twin brother, Yevgeny, who worked as a lawyer at the NSC and is also a lieutenant colonel.