Vindman's attorneys say he was ""retaliated against ... for performing his duty as an attorney and soldier." 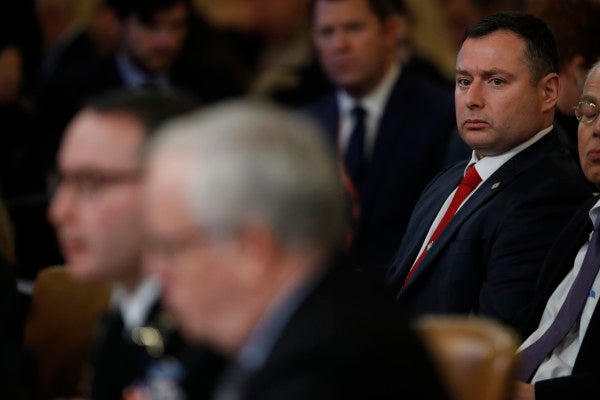 Both Vindmans were let go from the NSC following Alexander Vindman's testimony during President Donald Trump's impeachment inquiry, which focused specifically on a July 2019 call between Trump and Ukrainian President Volodymyr Zelensky.

Yevgeny Vindman did not testify during the impeachment inquiry.

According to a letter posted online by one of his attorneys, Yevgeny Vindman's complaint alleges that President Donald Trump and other senior White House officials “retaliated against him for performing his duty as an attorney and soldier,” and for disclosing “misconduct by other senior members of the president's national security team.”

On Wednesday, top Democrats on four House committees called on the Defense Department Inspector General to conduct an investigation “into the Trump Administration's apparent retaliation” against both Vindmans.

The letter — signed by Reps. Carolyn Maloney, Adam Schiff, Adam Smith, and Stephen Lynch — said the White House “appears to have taken a series of personnel actions” against Yevgeny Vindman “for joining his brother in raising concerns within his rating chain” about Trump's call with Zelensky.

It also says that Vindman was retaliated against for reporting allegations against Robert O'Brien, the president's national security advisor, and the NSC Chief of Staff Alex Gray. Vindman reportedly filed reports alleging that O'Brien and Gray committed “several” ethics and compliance violations by making “sexist and demeaning remarks” to women on the NSC, excluding women from meetings, and misusing government resources.

In one OER, on July 1, 2019, Eisenberg calls Yevgeny Vindman “the epitome of an Army officer and lawyer,” saying he is “a top 1% military attorney,” and “the best LTC with whom I have ever worked.”

But in an OER on April 6, 2020, Eisenberg said Vindman had “made NSC staff feel uncomfortable” because of “his unprofessional demeanor,” pointing to a “lack of judgment, failure to communicate well with his superiors, and inability to differentiate between legal and policy decisions.”

The letter, which requests that Acting DoD Inspector General Sean O'Donnell respond by Sept. 1, said that the difference between those two OERs is “evidence of the pattern of retaliatory actions” taken against Vindman.

“It is imperative that LTC Y. Vindman, who dedicated his career to serving his country, be given the opportunity to have the allegations he has raised be reviewed appropriately and independently, without political interference from the White House.”