One of the primary ways Trump has called into question the original whistleblower's credibility was by saying they had second-hand information. 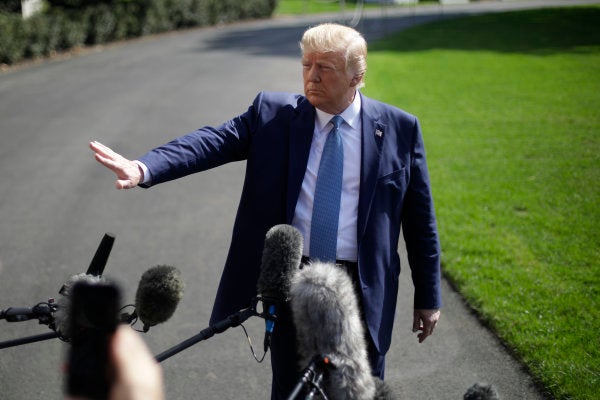 If you thought the chaos descending on Washington was anywhere close to clearing up, I have bad news for you: A second whistleblower has come forward.

President Donald Trump tweeted on Saturday night that the original whistleblower — who alleged that Trump asked Ukrainian President Volodymyr Zelensky to investigate the Bidens, soliciting foreign interference in the 2020 election — is “going to the bench and another 'Whistleblower' is coming in from the Deep State, also with second hand info.”

That's not quite the case.

First reported by ABC News, Mark Zaid — the attorney representing the original whistleblower, — said that the second whistleblower is being represented by his firm, and “has first-hand knowledge of some of the allegations outlined in the original complaint.” According to ABC, the second intelligence official has already been interviewed by Michael Atkinson, the Inspector General of the Intelligence Community.

The second whistleblower has not yet communicated with congressional committees spearheading the Investigation, ABC reports. The New York Times reported on Friday that a second official who had direct knowledge of the first whistleblower's complaint was considering filing their own complaint, though Zaid told ABC he wasn't sure if the person cited in the NYT was the second official he now represents.

NEWS UPDATE: I can confirm this report of a second #whistleblower being represented by our legal team. They also made a protected disclosure under the law and cannot be retaliated against. This WBer has first hand knowledge. https://t.co/zYkUYgJ0mE

Since the first whistleblower complaint was first reported, Trump's Twitter feed has been little else but railing against the whistleblower, congress, and the media — often honing in specifically on the fact that the whistleblower did not hear his phone call with Zelensky themselves. A number of Republican lawmakers have also taken this route, calling into question the credibility of the complaint because of the whistleblower's second-hand knowledge of the conversation.

Liddle’ Adam Schiff, who has worked unsuccessfully for 3 years to hurt the Republican Party and President, has just said that the Whistleblower, even though he or she only had second hand information, “is credible.” How can that be with zero info and a known bias. Democrat Scam!

Zaid clarified in another tweet on Sunday morning that it's not required for a whistleblower to have first-hand information.

“Although 2nd #whistleblower does possess 1st hand knowledge of certain info, there is NO legal requirement for any #WBer to have such knowledge,” Zaid tweeted. “Law only requires a 'reasonable belief.'”

The Office of the Inspector General of the Intelligence Community released a lengthy statement on Sept. 30th also attempting to put to rest the idea that the whistleblower had to have first-hand information in order to file a complaint. According to the statement, the ICIG “has not rejected the filing of an alleged urgent concern due to a whistleblower's lack of first-hand knowledge of the allegations” since Atkinson became the Inspector General in May 2018.

“Although the form requests information about whether the Complainant possesses first-hand knowledge about the matter about which he or she is lodging the complaint,” the statement reads. “There is no such requirement set forth in the statute.”

Trump has taken a number of different roads in trying to deal with the drama now engulfing his administration, calling the account outlined in the complaint “way off” and the whistleblower “highly partisan;” accusing the official who spoke to the whistleblower about his phone call of “SPYING” on him, and threatening “Big Consequences;” and as Axios first reported, now pinning the phone call with Zelensky on Energy Secretary Rick Perry, telling House Republicans he didn't want to make the call in the first place.

In his Saturday night tweet speaking about a second whistleblower coming forward, Trump said to “keep them coming” — though he may have spoken too soon: Zaid's colleague, Andrew Bakaj, tweeted on Sunday morning that their legal team represents “multiple whistleblowers” in connection to the original complaint.