In what appear to be his first public remarks on U.S. national security since his resignation as Secretary of Defense, retired Marine Gen. James Mattis offered a word of caution to President Donald Trump amid escalating tensions with Iran 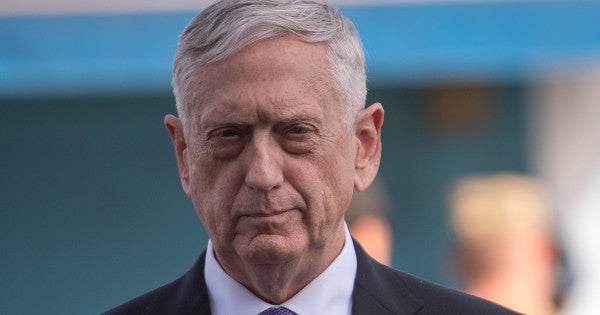 In what appear to be his first public remarks on U.S. national security since his resignation as Secretary of Defense, retired Marine Gen. James Mattis offered a word of caution to President Donald Trump amid escalating tensions with Iran on Tuesday.

“The United States should buy time to keep peace and stability and allow diplomats to work diplomacy on how to keep peace for one more hour, one more day, one more week, a month or a year,” Mattis said during remarks in the United Arab Emirates.

“Iran's behavior must change,” Mattis added, ” the military must work to buy time for diplomats to work their magic.”

In his remarks, entitled 'The Value of the UAE-US Strategic Relationship,' Mattis emphasized diplomacy and cooperation as critical to beating back the rising tide of radical terrorism around the world. Here are the meatiest bits, courtesy of Gulf News:

“We're going to have to work together as nations to respect each other's differences but throughout this terrorism that is growing, it is not going away; it's growing in the other direction, we see it spreading in North Africa, and we see what's going on now as it spreads deeper into South Asia.”

“We're going to have to figure out how to do this. We don't have to be perfect nations, each one of us. We're going to have to protect what we have and we all work on our own nations to make them better. But I'm going to be spending a lot of time studying how do we get more nations to work together and see a way for the world with less disparity. If this terrorism continues, eventually there will be a time that the terrorists get their hands on weapons of mass destruction. And we must not let that happen.

Mattis's remarks came the day after Trump offered yet another strong warning to Iran following a rocket attack on the heavily-fortified Green Zone in the Iraqi capital of Baghdad on Monday, an attack that government sources reportedly suspect was carried out by Tehran-connected Shi'ite militias.

“I think Iran would be making a very big mistake if they did anything,” Trump told reporters that evening. “If they do something, it will be met with great force but we have no indication that they will.”

Trump had previously tweeted that any future threats from Iran against the United States would “be the official end of Iran.”

If Iran wants to fight, that will be the official end of Iran. Never threaten the United States again!

Mattis's emphasis on diplomacy is unsurprising despite the 'Mad Dog' moniker he despised. After all, this is the same man who once told Iraqi leaders, “I come in peace. I didn't bring artillery. But I'm pleading with you, with tears in my eyes: If you fuck with me, I'll kill you all.”

Indeed, Mattis was generally in favor of engaging with Iran over President Barack Obama's landmark nuclear accord, a position that put him at odds with Trump.

“If we can confirm that Iran is living by the agreement, if we can determine that this is in our best interest, then clearly, we should stay with it,” he told Congress in October 2017, per ABC News. “I believe, at this point in time, absent indications to the contrary, it is something the president should consider staying with.”

It's also worth noting that Mattis was perhaps the most cool-headed of the Trump administration's military and natsec advisors. Just consider this colorful anecdote surfaced by the Washington Examiner earlier this month regarding then-national security advisor H.R. McMaster:

[McMaster] was elated to discover an Iranian plot that could provide pretext to attack. McMaster's failed efforts at intervention, including in Syria, point at institutional caution.

After a North Korean missile test in 2017, McMaster sought options for an immediate military attack during a call with then-Defense Secretary James Mattis and then-Secretary of State Rex Tillerson.

The Cabinet secretaries mistakenly believed that McMaster hung up after speaking, and shared surprisingly frank thoughts, not realizing they were on speakerphone in McMaster's office.

“They thought the White House hung up our side of the phone call,” the former official said. “Mattis was like, 'Rex, are you still here?' [Mattis] was like, 'Oh my God, that moron is going to get us all killed. He is an unstable asshole.' McMaster was standing there over his desk. … He was turning bright red.”

Mattis resigned on principle in December 2018 over Trump's sudden decision to withdraw U.S. troops from Syria, telling Trump in his resignation letter, “Because you have the right to have a Secretary of Defense whose views are better aligned with yours on these and other subjects, I believe it is right for me to step down from my position.”

WATCH NEXT: Gen. David Petraeus On Iran and Shia Militias