Defense Secretary Jim Mattis asked them to "keep the faith in our country and hold fast" at such a difficult time. 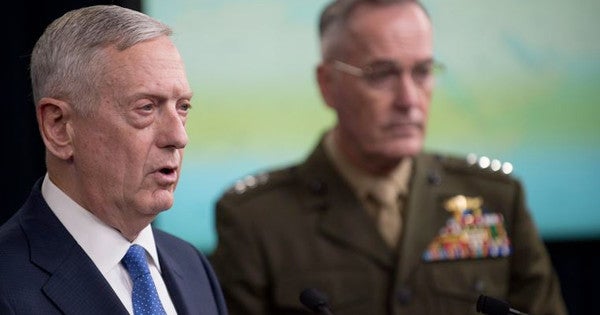 Defense Secretary Jim Mattis sent a farewell message to all Department of Defense employees on Monday, instructing them to “keep the faith in our country and hold fast” at such a difficult time.

Mattis will transfer authority of the Department of Defense to his deputy Patrick Shanahan later this evening just before midnight. He resigned in protest over President Donald Trump's foreign policy views, which sharply diverged from his own, as he made clear in his resignation letter.

In his farewell, Mattis quoted a telegram from President Abraham Lincoln to Gen. Ulysses S. Grant sent during the Civil War, in which he said, “let nothing which is transpiring, change, hinder, or delay your military movements, or plans.”

“Our Department's leadership, civilian and military, remains in the best possible hands,” Mattis wrote. “I am confident that each of you remains undistracted from our sworn mission to support and defend the Constitution while protecting our way of life. Our Department is proven to be at its best when the times are most difficult. So keep the faith in our country and hold fast, alongside our allies, aligned against our foes.”

Mattis' use of the phrase “hold fast” sounds familiar; In 2017, he told a group of American troops in Afghanistan that they just need to “hold the line until our country gets back to understanding and respecting each other.”

“It has been my high honor to serve at your side,” Mattis wrote in closing. “May God hold you safe in the air, on land, and at sea.”