Trump Says He ‘Essentially Fired’ Mattis, Who Literally Handed Him A Letter Of Resignation

President Donald Trump said on Wednesday that he “essentially fired” former Defense Secretary Jim Mattis, which is an interesting way... 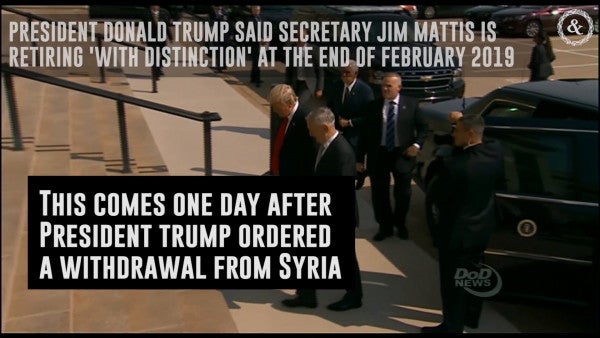 President Donald Trump said on Wednesday that he “essentially fired” former Defense Secretary Jim Mattis, which is an interesting way of characterizing the moment on Dec. 20 when Mattis literally walked into the Oval Office and handed the president a letter of resignation.

This is like the scene in the film “Waiting” when the boss says, no, you can't quit. I'm firing you. That's what happened.

Per the White House pool report, Trump said of Mattis: “What's he done for me? How had he done in Afghanistan? Not too good … As you know, President Obama fired him, and essentially so did I.”

Just to refresh your memory,
last month Mattis wrote a resignation letter saying he would leave the Pentagon toward the end of February. Trump then praised Mattis on Twitter, saying he would be retiring “with distinction” while praising all the progress that had come during his tenure.

A few days later, amid constant media coverage of how scathing of Trump's foreign policy that letter truly was, the president decided he would cut the time table considerably, and announced that Deputy Secretary of Defense Patrick Shanahan would step into the role on Jan. 1, 2019.

“Essentially fired” sounds a lot like “almost fired” or “hypothetically fired” — aka not actually fired at all — but hey, Mr. President, you do you.

Before he made up this latest bullshit about how he really fired Mattis but you're just not smart enough to understand that, Trump also claimed that Mattis was “ingloriously fired” by President Obama but was given a second chance —
yet another patently absurd claim.