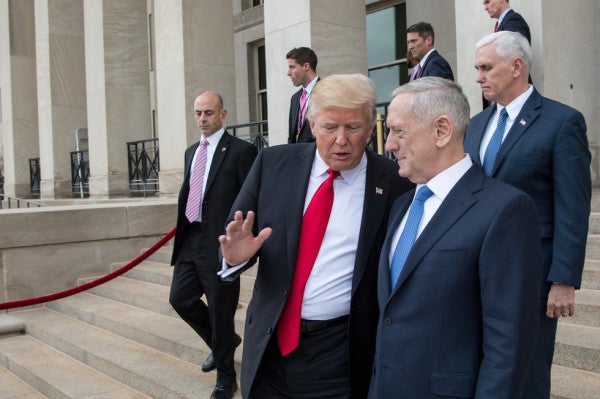 Brace yourselves, the post-Mattis tell-alls are coming.

A book offering a purported “fly on the wall” view of the relationship between President Donald Trump and Defense Secretary Jim Mattis — callsign Chaos — is about to drop in October, according to NBC News.

“Often described as the administration's 'adult in the room,' Mattis has said very little about his difficult role, and since his resignation has kept his views of the President and his policies private. Now, Mattis's former chief speechwriter and communications director, Guy Snodgrass, brings readers behind that curtain,” reads a teaser description for the book on Amazon and Goodreads, where it is expected to be available on Oct. 29.

Titled “Holding The Line: Inside the Pentagon with General Mattis,” the book description says its contents are drawn from Snodgrass’ “meticulous notes” that he kept during 17 months working for Mattis, which include anecdotes on how he reacted when he learned of major policy decisions over Twitter rather than from the White House, and how Mattis “minimized the damage done” to allies and slow-rolled some of Trump’s more controversial decisions.

I’m speculating a bit here on what the reaction was to learning of a major DoD policy change coming via presidential tweet, but it probably involved at least a few cuss words.

Mattis resigned in protest over Trump’s decision to quickly withdraw all U.S. forces from Syria, which the president has since walked back. The former defense secretary recently rejoined Stanford University’s Hoover Institution.

The book’s title seems to be a nod to Mattis’ talk with deployed troops in 2017, in which he told them, “You just hold the line until our country gets back to understanding and respecting each other, being friendly to one another; what Americans owe to one another.”

Snodgrass told NBC he was still finishing the book and was planning to submit it to the Pentagon for review, to ensure no classified material is shared.

Although this is the first “Pentagon insider” account of Mattis’ tenure, other books have offered some interesting tidbits on the Mattis-Trump relationship, most notably in Bob Woodward’s book “Fear.”

As my colleague Jeff Schogol wrote:

After speaking to reporters on Tuesday, news broke that author Bob Woodward's upcoming book portrays Mattis as frustrated with President Trump, especially after a meeting about North Korea, when the defense secretary allegedly vented to colleagues that Trump has the understanding of a “fifth- or sixth-grader.” (Mattis has called Woodward's account “fiction.”)