Defense Secretary Jim Mattis has resigned in protest of President Donald Trump's decision to withdraw all American troops from Syria,... 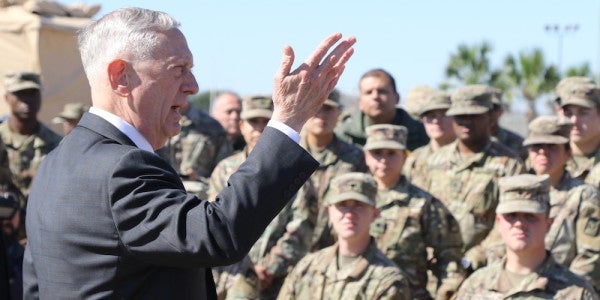 Defense Secretary Jim Mattis has resigned in protest of President Donald Trump's decision to withdraw all American troops from Syria, according to The New York Times.

His resignation letter, while critical of the president's views on foreign policy, did not mention Syria, but officials told The Times that Mattis traveled to the White House on Thursday “in a last attempt to convince Mr. Trump to keep American troops in Syria. He was rebuffed, and told the president that he was resigning as a result.”

Defense officials tell me Mattis went to the White House to discuss Syria & that he was livid after reading reports that Turkey's Defense Minister threatened to kill US-backed Kurds & put them in ditches once the US withdrew. He was incensed at this notion of betrayal of an ally

Interestingly, Mattis once revealed what would lead him to resign in protest during an April 2014 talk in San Francisco, and he made it clear that he would only do so under the most dire of circumstances, since his subordinates would not be able to do the same.

“The lance corporals can't retire. They're going. That's all there is to it,” he said.

In 2003, Mattis was the commanding general of the 1st Marine Division. He was ordered into Iraq in March and led his division to victory over Baghdad. But privately, he knew going to war against Saddam Hussein probably wasn't the best call.

“I think people were pretty much aware that the US military didn't think it was a very wise idea,” he said in 2015, before being named Defense Secretary. “But we give a cheery 'Aye aye, Sir.' Because when you elect someone commander in chief — we give our advice. We generally give it in private.”

Mattis, like many other generals before the war, offered his advice to then-Defense Secretary Donald Rumsfeld on the problems of going into Iraq. This frank advice is expected of high-ranking military officers, but ultimately it's up to the civilian leadership to make the decision.

Still, seven retired generals eventually came out publicly against Rumsfeld in 2007 in what was dubbed “the generals' revolt.” Mattis, still on active duty at the time, was not among them.

Later, during his April 2014 talk in San Francisco, he was asked specifically about whether there was a scenario in which he may have retired in protest. Mattis allowed some unethical orders and other scenarios that would lead him to do so, but he said, “you have to be very careful about doing that. The lance corporals can't retire. They're going. That's all there is to it.”

He added: “You abandon him only under the most dire circumstances, where the message you have to send can be sent no other way. I never confronted that situation.”

“My views on treating allies with respect and also being clear-eyed about both malign actors and strategic competitors are strongly held and informed by over four decades of immersion in these issues. We must do everything possible to advance an international order that is most conducive to our security, prosperity and values, and we are strengthened in this effort by the solidarity of our alliances,” Mattis wrote in his resignation letter.

“Because you have the right to have a Secretary of Defense whose views are better aligned with yours on these and other subjects, I believe it is right for me to step down from my position.”

SEE ALSO: Trump Is Considering Withdrawing US Troops From Afghanistan In The Coming Weeks