On New Year’s Eve, A Brief Phone Call Will Mark The End Of Mattis’ Tenure As Defense Secretary

The handoff between Mattis and Shanahan will have little pomp and circumstance when it takes place. 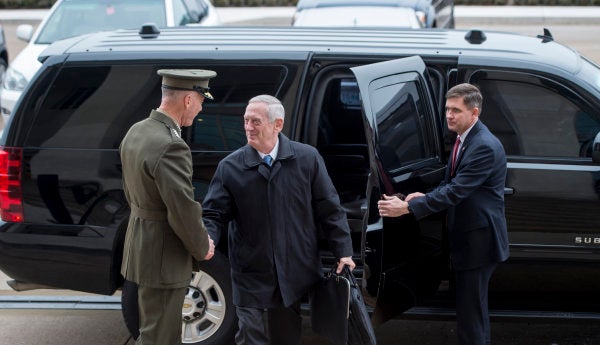 On New Year's Eve, a short phone call will mark the end of Defense Secretary Jim Mattis' tenure and the beginning of Patrick Shanahan's command of the Pentagon.

Mattis, 68, is officially out as defense secretary on Dec. 31 — two months ahead of when he was supposed to turn over the reins of the Defense Department. President Donald Trump forced Mattis out ahead of schedule after becoming angry over coverage of Mattis' resignation letter, which sharply rebuked the president's foreign policy views.

The handoff between Mattis and Shanahan will have little pomp and circumstance when it takes place — in the form of a conference call just minutes before 2018 comes to a close, according to a defense official.

“Contact will be established by the Office of Secretary of Defense communications team who will bring Mr. Mattis and Mr. Shanahan into the call,” a defense official explained, adding that the call will go by an approved script that, unfortunately, will not be made public.

Still, the basic gist is that Mattis and Shanahan will be brought on the line, go through a prepared text handing over command, and then it will be all over. As the ball drops in New York City, a new acting Secretary of Defense will emerge. And Mattis will likely head west to his hometown of Richland, Washington, or back to his teaching position at Stanford's Hoover Institution.

A former Boeing senior vice president, Shanahan has been serving as deputy secretary of defense since July 2017. He'll be serving as acting Secretary of Defense for the time being, although he is reportedly under consideration to be nominated as a permanent replacement, in addition to Sen. Tom Cotton (R-Ark.), Air Force Secretary Heather Wilson, and Navy Secretary Richard Spencer.